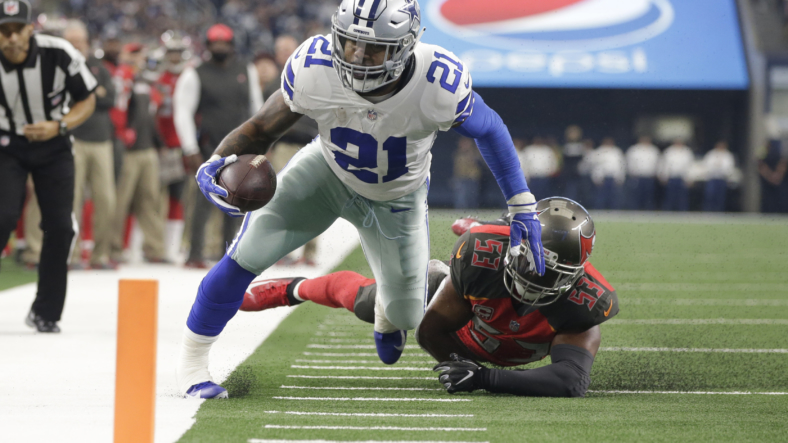 The Dallas Cowboys are set to take on the Tampa Bay Buccaneers to get their 2022 season underway. With Tom Brady retiring and then unretiring, the Bucs will have their Super Bowl-winning signal-caller under center once again. Despite the change at head coach this past offseason, Tampa Bay is still expected to make a deep postseason run. Meanwhile, Jerry Jones’ squad is coming into the season with tamed expectations.

Cowboys fans will likely remember the 2022 offseason as one of the roughest in recent memory. Despite a solid draft in which several positions of need were addressed, it could be argued that Jones didn’t do nearly enough to help his team. Several offensive contributors were jettisoned, either by trade or cut, leaving the roster thin in terms of talent. The offensive line is a prime example of the risky strategy employed this year.

However, as Week 1 inches closer, there are going to be some key matchups to keep an eye on during this key NFC showdown. 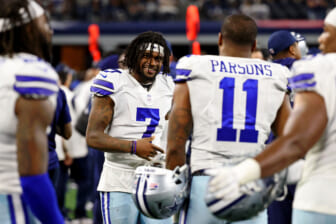 Notice that the Cowboys don’t have a starting left tackle right now. Considering how close Dallas is to their first regular season game, this could be an unmitigated disaster. On the other hand, the injury to Tyron Smith could be a blessing to another player. We’re referring to Jason Peters, of course. The 40-year-old tackle is still more than serviceable. In fact, despite his age, Peters appeared to be more than healthy for the Chicago Bears last year, bouncing back from a 2020 campaign cut short by injury.

If Jason Peters is a no-go, the Cowboys are likely to trot out rookie lineman Tyler Smith. Owner Jerry Jones himself recently said that he was the left tackle of the future. Regrettably, if Week 1 is the beginning of this so-called future, Smith will likely have to face two-time Pro Bowler, Shaquil Barrett. No. 58 for the Bucs ended the 2021 regular season with 10 sacks and nine tackles for a loss. Pro Football Focus graded Barrett’s pass-rushing exploits at 81.5, accumulating 75 pressures according to the publication. Needless to say, Smith could be in for a long rookie debut.

Ezekiel Elliot looks to get 2022 started off on a positive note. Elliot has seen a lot of wear on those tires of his, but he’s still the lead back. The argument could be made that he faded down the stretch last year, especially after Week 9. Elliot only surpassed 40-plus yards on the ground a grand total of four times.

Against the Bucs’ stout run defense, Elliot will have his hands full. This is the same defense that was third in the league in terms of rushing yards allowed with 1,573. Opposing running backs managed 4.3 yards per carry as a whole in the regular season. In the playoffs, the Bucs’ defense tightened things ever more, surrendering 73 and 95 yards in each game, respectively. The fact is that this will be no cakewalk for Elliot.

Related: Dallas Cowboys will likely cut ties with Ezekiel Elliott next season, no matter how well he plays in 2022

Devin White was an absolute steal for the Buccaneers back in 2019, and ever since, he’s become one of the best defenders for the Bucs. Fans are well aware of this pass-rushing prowess. However, he struggled somewhat last season in coverage. According to PFF, he had 21 missed tackles and allowed a passer rating of 103.3 in coverage based on 594 snaps in that department.

Meanwhile, Dalton Schultz will need to play a key role in the Cowboys’ passing offense with Michael Gallup’s injury sidelining him for the Week 1 game. Schultz has emerged as a true weapon for head coach Mike McCarthy’s offense, totaling 1,423 receiving yards in the last two years. With so many missing or new pieces with regard to the passing offense, Schultz will need to continue with his notable scoring; he has 12 touchdowns in the last two seasons.

Two-time Pro Bowl defensive end DeMarcus Lawrence is going to have his hands full against Tristan Wirfs. Lawrence will be tasked with disrupting Brady’s offense in Week 1. The key to slowing down the Bucs offense is to get to Brady early and often. The NFL’s version of Superman isn’t invincible. Lawrence turned on the jets in the final regular season game as well as in the playoffs.

He’ll need to continue that mean streak against Brady. Wirfs is widely respected as one of the best tackles in the league, especially in terms of his pass-blocking. According to PFF, he concluded the regular season with an 84.2 grade in that area. Needless to say, this won’t be an easy matchup for Lawrence at all.

Related: Evaluating whether the Dallas Cowboys made the right call with Cooper Rush