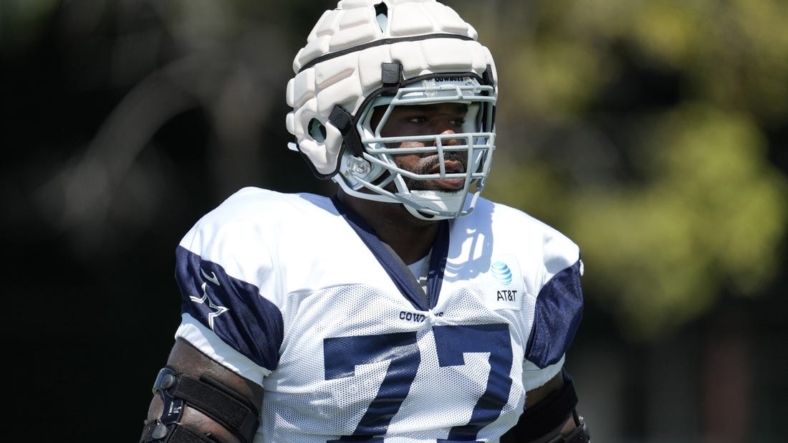 It was a mere technicality. The Dallas Cowboys had to wait until they trimmed their roster to 53 in order to place star left tackle Tyron Smith on injured reserve.

The team made that move official on Wednesday after Smith suffered a torn hamstring during training camp practice earlier this summer. Smith is expected to be out until at least December, but is able to return before then if everything goes right in his rehab.

It’s been noted that rookie left tackle Tyler Smith will take over as the Cowboys’ left tackle, acting as quarterback Dak Prescott‘s blindside protector. To say that this is a less-than-ideal scenario for the Cowboys would be an understatement.

Impact on Tyron Smith injury on the Dallas Cowboys season

Smith’s injury is described as gruesome with the hamstring torn completely off the bone. This seems to suggest that a return before December is highly unlikely. The No. 24 overall pick in April’s NFL Draft out of Tulsa, Tyler Smith had been getting reps at left guard before Dallas’ start left tackle was injured.

Even then, he seemed to lose out to veteran Connor McGovern for the starting job. Second-year player Josh Ball had been playing left tackle when Tyler Smith wasn’t in action during training camp prior to his devastating injury.

The single most important position in football outside of quarterback, left tackle can make or break a team’s season. With Prescott now entering his second season following a career-altering ankle injury, the hope is that this doesn’t impact him too much.

You don’t replace someone of Smith’s ilk on a whim. Back in 2020 when he missed 14 games to injury, Dallas boasted a mere 6-10 record. That’s the same season that Prescott was injured. With Smith out, Dallas relied on Brandon Knight to start a majority of the games at left tackle. It didn’t go too swimmingly.

There’s always a chance that Dallas looks outside of the organization for help. Former New England Patriots first-round pick Isaiah Wynn is said to be on the trade block. Veteran and four-time Pro Bowler Andrew Whitworth also didn’t completely rule out a return after retiring following his former Los Angeles Rams’ Super Bowl win back in February.

For now, Tyler Smith will get the first crack at replacing his oldrer counterpart at one of the game’s most-important positions. No pressure.