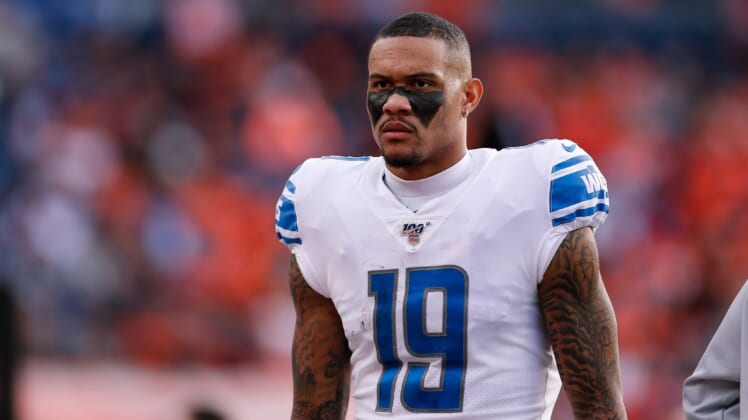 While the wide receiver market has been pretty soft thus far this week, it appears that Golladay has now started to garner some interest. That includes a surprising team in the New York Giants.

According to NFL Media’s Ian Rapoport, the two sides have been in talks about a contract. They are now about to go old school and meet in person.

This would be somewhat of a big move for embattled Giants general manager David Gettleman. The idea would be to add a reliable No. 1 option for young quarterback Daniel Jones as he enters his third season as the Giants’ starter.

It’s also only made possible by the fact that New York was able to lock up star defensive lineman Leonard Williams on a long-term contract, lowering his 2021 cap number.

How would Kenny Golladay fit with the New York Giants

To put it bluntly, the Pro Bowl receiver would immediately take over as New York’s top receiving threat behind running back Saquon Barkley.

That’s not hyperbole. Sterling Shepard is the team’s leading returning receiver. And after releasing Golden Tate earlier in the offseason, this position has become a major need for New York.

The 27-year-old Kenny Golladay missed 11 games this past season with a hip injury. That’s likely one of the reasons he’s set for a rare in-person meeting in the age of COVID-19.

Prior to the 2020 season, the Northern Illinois product was on a clear upward trajectory. That included Golladay putting up a combined 135 receptions for 2,253 yards with 16 touchdowns in 2018-2019.

What type of contract is Kenny Golladay looking at?

Obviously, the hip injury is a major backstory here. If he’s 100%, there’s absolutely no reason to believe the former Pro Bowler won’t earn a long-term contract from the Giants or another team.

If not, he could potentially ink a one-year deal and hit the NFL free agent market when there’s more money to be spent next March. This is magnified by the fact that receivers have been met with a cold shoulder thus far during the 2021 cycle.

That’s not in any way a great market. In fact, some of the top-end pass catchers such as JuJu Smith-Schuster remain on the open market.

As for the Giants, they are roughly $6.5 million under the 2021 NFL salary cap. Obviously, Gettleman and Co. would have to do some cap gymnastics to make this work.