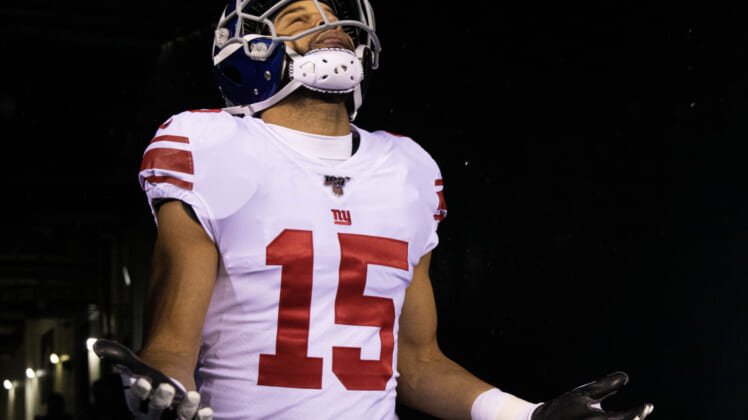 With the New York Giants in a disastrous cap situation, NFL rumors have pointed in the direction of Golden Tate being a casualty of the economic times.

This can’t be seen as too much of a surprise. Tate recorded just 35 receptions for 388 yards with two touchdowns while catching passes from struggling signal caller Daniel Jones a season ago. However, it will also have some wide-ranging ramifications for the Giants moving forward.

Cutting the wide receiver outright saves New York roughly $6.1 million with a $4.7 million dead cap hit. If the Giants were to designate Tate a post-June 1 cut, said savings in 2021 would reach an estimated $8.5 million.

The Giants currently find themselves roughly $4.05 million over the estimated 2021 NFL salary cap. Obviously, moving off Golden Tate is the first of several moves for general manager David Gettleman.

As for the Giants’ wide receiver situation, it stands to reason that this will be a central focus, both in free agency and via the draft. Sterling Shepard is the team’s leading returning receiver. He caught 66 passes a season ago. After that, there’s not much to write home about.

This move puts New York under the projected cap. In no way does that mean Gettleman and Co. are done cutting the fat. Numerous veterans will be up on the chopping block ahead of the start of NFL free agency. Here’s a look at a few with their cap savings in parenthesis.

Of course, the Giants could add to that by designating all four post-June 1 cuts. As of now, moving off them immediately would save a cool $30.7 million against the cap.

Williams, 26, played under the $16.13 million franchise tag in his first full season as a member of the Giants after being acquired from the Jets. He responded by recording an astounding 30 quarterback hits to go with 11.5 sacks. Williams becomes the Giants’ next priority.

Golden Tate and his value in NFL free agency

Despite his somewhat lackluster numbers a season ago, Tate caught 67.4% of his targets from Giants quarterbacks. He has proven to be an above-average slot receiver in the past.

Remember, this is the same guy who recorded over 1,000 yards with the Detroit Lions in both 2016 and 2017. While he won’t demand a huge payday or a long-term contract, the expectation is that this former Pro Bowler will draw interest from several contending teams.

Click below for more New York Giants rumors and news.