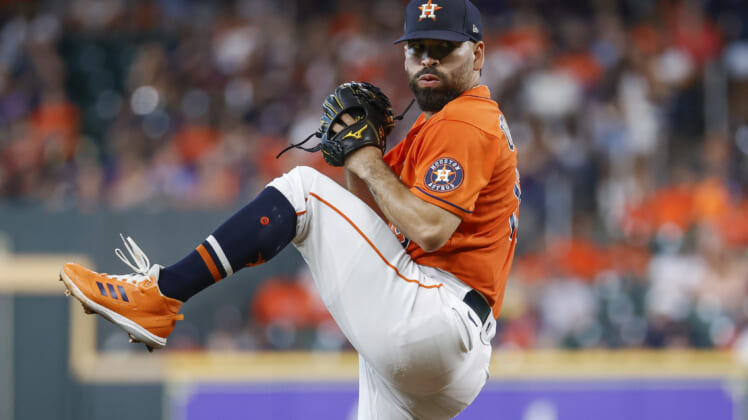 Jose Urquidy has been among the first-place Houston Astros’ most-consistent starting pitchers this season. He’s under team control through the 2025 season and is only 27 years old.

That’s why it’s a surprise we’re hearing a report from ESPN’s Jeff Passan indicating that Houston has made Urquidy available in talks leading up to the Aug. 2 MLB trade deadline.

A number of teams, both contenders and pretenders, have made controllable pitchers available as they attempt to cash in on a bull market.

Coming off a three-game sweep at the hands of the lowly Oakland Athletics, Houston will be active before the deadline passes. Urquidy could be its top asset.

Houston’s rotation goes six deep right now with Justin Verlander (1.86 ERA) and Framber Valdez (2.74 ERA) headlining things. It has two other pitchers in that of Luis Garcia and Cristian Javier pitching at the same level as Urquidy. With needs in other areas, it somewhat makes sense to sell high on Urquidy. Here’s a look at three ideal trade scenarios.

With Urquidy under team control for the foreseeable future, we envision non-contending teams having interest in his services. Meanwhile, Houston is going to be looking for Major-League talent, not prospects.

This deal seems to be a match made in heaven. Baltimore has a robust young lineup that has shown out during a surprising 2022 season. The long-downtrodden club needs controllable pitching to expedite its climb to contending status.

The Astros nab a major upgrade in left field while enabling Michael Brantley to move to center. They also pick up a closer in Lopez who has been dominant since transitioning from being a starter.

Lopez teaming up with Ryan Pressly as a late-inning arm would shorten games for the Astros. In the process, it would make the trade of Jose Urquidy make sense.

The bottom-feeding Pittsburgh Pirates have put All-Star outfielder Bryan Reynolds on the trade block with the New York Yankees already being linked to the 27-year-old. Why wouldn’t Houston want to potentially block that while adding at a position of utmost need?

As for Pittsburgh, the inclusion of Urquidy as part of a package for Reynolds would make sense. He’s a controllable arm for a Pirates organization that is top heavy when it comes to position players in its farm system.

Typically, acquiring someone of Reynolds’ ilk would cost multiple top-five prospects. He’s under team control through the 2025 season and has proven himself to be among the best center fielders in the game.

Instead of going that route, Houston offers up Urquidy as part of the package. It also adds No. 1 prospect Hunter Brown and a power hitting prospect in Diaz. Brown would join Urquidy in the Pirates’ rotation immediately given his success at Triple-A Sugar Land this season.

As for Diaz, he can play both catcher and first base. The 23-year-old Dominican native is hitting .302 with 17 homers, 69 RBI and an .875 OPS in Double-A and Triple-A. He, too, could join the big league club immediately.

After a solid 22-14 start to the season, San Francisco finds itself at 48-50 and has lost seven consecutive games. It is 3.5 games out of the final wild card spot in the National League and could very well opt to sell off impending free agents.

That’s where the trio of Joc Pederson, Wilmer Flores and Jarlin Garcia come into play. All three could provide a contender with something useful.

For Houston, that would include Pederson proving to be an upgrade in left field. The two-time All-Star has hit 17 homers while posting a solid .815 OPS this season. Boasting an ability to play three infield positions, Flores has hit 14 homers on the campaign. Talk about Houston adding pop. As for Garcia, he’s pitched to a 2.83 ERA as a left-handed specialist out of the bullpen.

As for the Giants, they are going to look to compete in 2023 regardless of whether they’re sellers ahead of the deadline. They’ll want to get Major League-level talent in return. That’s where Urquidy makes sense as a controllable asset.

This is magnified by the fact that current Giants starters Carlos Rodon and Alex Cobb will likely be free agents during the winter. Adding a top-30 prospect from the Astros’ farm sweetens the pot here. Julks has hit 19 homers in Triple-A this season and could audition for an every-day spot in the outfield as the season progresses.