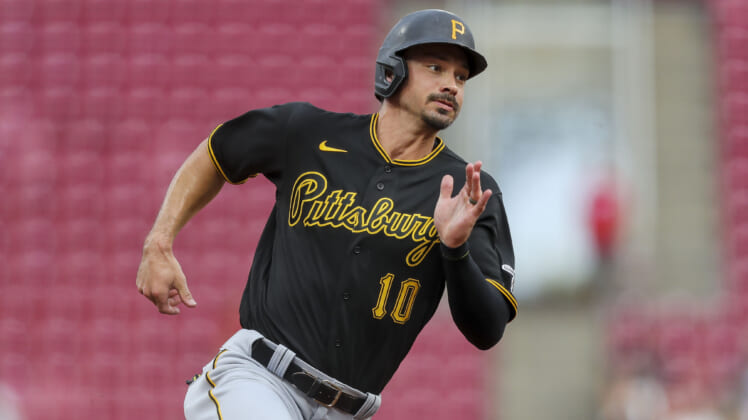 As the New York Yankees lose their stranglehold atop the MLB standings, injuries are mounting before the trade deadline on Aug. 2. Already in the market for an outfielder, executive Brian Cashman appears to be ramping up his efforts after the Giancarlo Stanton injury.

The All-Star slugger won’t rejoin the lineup until mid-August, in a best-case scenario, thanks to an Achilles injury. It’s only added fuel to the latest MLB trade rumors, with targets like Juan Soto and Andrew Benintendi seeming more realistic based on the current position New York is in.

According to Jim Bowden of The Athletic, the Yankees have not stopped calling the Pirates this season about a potential deal for Reynolds. New York made a push for him this offseason only to be rejected. As the trade deadline nears, those efforts are being ramped up again.

Reynolds would solve a lot of issues in the Yankees’ outfield. The 27-year-old is a switch-hitter who is also comfortable playing center field. Just as importantly, he is under team control through 2025 and all of that is appealing to New York.

It remains highly unlikely that Pittsburgh moves one of its best players, especially considering his contract. Let’s examine what type of trade offer it might take for the Yankees to change the Pirates’ mind by the Aug. 2 deadline.

What would a Bryan Reynolds trade cost the New York Yankees

Reynolds figured out his issues at the plate and is performing up to expectations. He is precisely the player New York wants patrolling the outfield in Yankee Stadium. Feeling confident in his ability to produce at the plate, it now comes down to potential cost.

If using the Baseball Trade Values calculator, this deal grades out in favor of the Yankees. However, Dominguez’s upside and Peraza’s proximity to the majors will likely be favored by Pittsburgh. Germán could also provide the Pirates with a buy-low pitcher who they can attempt to flip a year from now.

The benefit of this deal is New York keeps Anthony Volpe in its farm system and Reynolds’ contract doesn’t prevent ownership from signing Aaron Judge to a long-term deal this winter. While some fans might view it as an overpay, it’s the going rate for a young All-Star outfielder in his prime with multiple years of contract control.