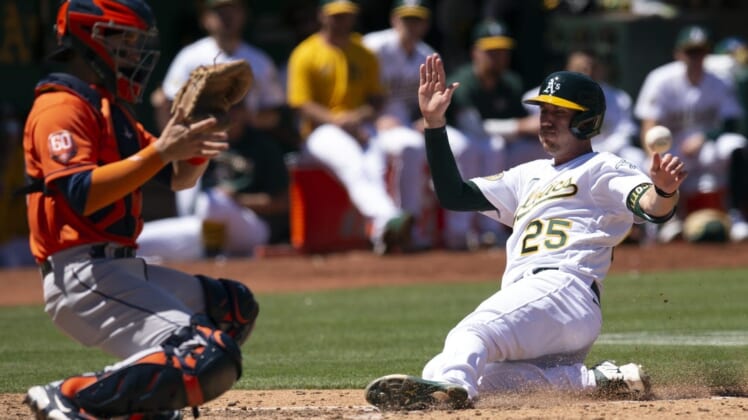 Stephen Vogt and Stephen Piscotty hit back-to-back home runs, Cole Irvin continued his impressive July run and the Oakland Athletics wrapped up a three-game sweep of the visiting Houston Astros on Wednesday afternoon with a 4-2 win.

Tony Kemp capped a big series against his former team with three hits, including two doubles, and Domingo Acevedo pitched out of an eighth-inning jam to protect a two-run lead, lifting the A’s to their sixth win in the last seven days.

Yordan Alvarez homered and walked twice, once intentionally, for the Astros, whose three-game losing streak is just their third of the season.

The A’s never trailed after going up 2-0 in the second when Vogt belted his fifth homer of the season off Astros starter Cristian Javier (6-6) and Piscotty launched the next pitch for his fourth homer. Both were solo shots.

Oakland added single tallies in the fifth on an RBI double by Kemp, and in the seventh on Skye Bolt’s run-scoring single.

Javier gave up the first three Oakland runs in his five innings, allowing five hits and one walk. He struck out six.

The Astros got within a run twice, the first time being when Jake Meyers tripled home Mauricio Dubon in the fifth, and then when Alvarez homered, his 29th, in the sixth.

Irvin (6-7) worked seven innings, during which he allowed two runs and four hits. He walked one and struck out four.

Acevedo took a 4-2 lead into the eighth before yielding Yuli Gurriel’s second double of the game with two outs.

The A’s then elected to walk Alvarez intentionally even though it meant putting the potential tying run on base. The strategy proved to be a success when Acevedo got Aledmys Diaz to ground out to end the threat.

A.J. Puk took over in the ninth and retired the side in order for the second save of his career, both of which have come in the last six days.

Piscotty added a single to his homer and scored twice for Oakland.

The Astros finished with just five hits, four of which went for extra bases.