Joe Gibbs Racing has big expectations for the 2023 season after coming up short last year. Let's dive into previews for each of the team's drivers.

Joe Gibbs Racing ended the 2022 season coming up just short of its first NASCAR Cup Series championship since 2019 with former driver Kyle Busch. The team was likely one green-flag run away from securing the title.

Let’s dive into every Joe Gibbs Racing driver’s outlook for the 2023 NASCAR season.

Denny Hamlin started the final lap of the Round of 8 in position to make the Championship 4 for the fourth straight year. By the time those 20 seconds were complete, Hamlin, 42, was out due to Ross Chastain’s video-game move at Martinsville Speedway.

The driver of the No. 11 car for Joe Gibbs Racing had a final stat-line of two wins, 10 top-5 finishes, 16 top-10 finishes, and a 15.5 average finishing position. It was arguably Hamlin’s worst season since 2018 when he went winless.

Entering the 2023 season, the 42-year-old driver needs to have a good year. Hamlin and his sponsor, FedEx, are in the final years of their contracts with Joe Gibbs Racing. Granted, it is not the exact same situation compared to Busch and Mars last year.

Hamlin was the best driver over the 10-race playoff but it didn’t end in a Championship 4 appearance. It is clear that he still has the ability to win a championship but will the stress of securing his future create some difficulties?

In the end, it seems pretty likely that Hamlin and FedEx return for the 2024 season. The co-owner of 23XI Racing will have a lot on his shoulders this season; however, no one should expect anything less in terms of performance.

Hamlin is set for another pursuit of his first NASCAR Cup Series championship and if the performance he put on during the 2022 playoffs carries over, no one should be doubting his ability to get it done.

Martin Truex Jr.’s outlook at Joe Gibbs Racing in 2023 and beyond

Martin Truex Jr. had the worst year of his career at Joe Gibbs Racing and it has brought up serious questions. Has Truex, 42, entered his driver decline much like Jimmie Johnson once did or was it a fluke year?

The driver of the No. 19 car finished the season with zero wins, four top-5 finishes, 15 top-10 finishes, and a 14.9 average finishing position. It was Truex’s worst performance across the board since the 2014 season with Furniture Row Racing.

As of now, Truex remains undecided on the 2024 season and will be for some time. Perhaps, the first couple of months following the 2023 Daytona 500 could decide whether he returns or not.

Truex missed the 2022 playoffs for the first time in his Joe Gibbs Racing tenure and if it does not get better, this will likely be it for him. However, the 42-year-old driver now has a chip on his shoulder.

Truex seems likely to win a race during the 2023 season but may not return to his previous form as a Championship 4 contender. The expectation should be a playoff appearance with a ceiling of his old self.

Christopher Bell entered the 2022 season with high expectations in his second campaign with Joe Gibbs Racing in the NASCAR Cup Series. The start of the year was tough; however, Bell, 28, finally found victory lane in July at New Hampshire Motor Speedway.

The driver of the No. 20 car was consistently solid but did not have enough to win until the final race of the Round of 12 when he was in a must-win situation. Bell won at the Charlotte ROVAL and did the same thing at Martinsville Speedway in the Round of 8.

If not for a caution at Phoenix Raceway between Alex Bowman and Michael McDowell, it seems pretty likely that Bell would have been the 2022 NASCAR Cup Series champion with his long-run speed. Unfortunately for him, a bad pit stop ended his championship hopes.

Now, Bell enters the 2023 season with very high expectations. After becoming NASCAR’s new closer with the two biggest clutch victories in the playoff format’s history, the 28-year-old driver is primed for a massive year.

Bell is one of the championship favorites and finally appears positioned to reach the expectations set by many within the sport. He has firmly taken the spot as the organization’s cornerstone driver in 2023 and beyond.

As previously stated, the expectations are high for the 2023 season. Bell will likely reach these expectations and lead Joe Gibbs Racing through what could be a very good or rough year.

Ty Gibbs didn’t expect to compete in 15 races during the 2022 NASCAR Cup Series season; however, an injury to former 23XI Racing driver Kurt Busch threw Gibbs into the fire right away.

Gibbs, 20, made his debut at Pocono Raceway and finished in a respectable 16th place. The first three races were incredible for the 20-year-old but it went downhill with only four top-20 finishes in the next 12 events.

This happened alongside Gibbs’ first full-time season in the NASCAR Xfinity Series and it ended in a championship after beating JR Motorsports at Phoenix Raceway. The driver of the No. 54 car had a final stat line of seven wins, 16 top-5 finishes, and 23 top-10 finishes. 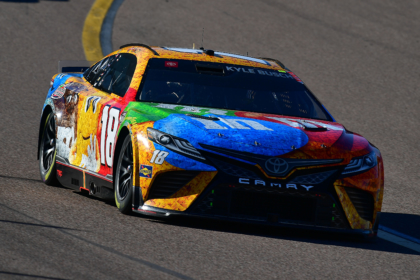 Also Read:
3 best candidates to become Joe Gibbs Racing’s next driver in the No. 18 car

Gibbs was then tapped to replace Busch after he departed for Richard Childress Racing. Instead of driving the organization’s No. 18 car, he was given the No. 54 car to create his own identity at Joe Gibbs Racing.

Now, the North Carolina native is set to begin his full-time career in the Cup Series. Despite his recent experience, it should be expected that Gibbs will struggle but not as badly as in 2022.

The driver of the No. 54 car is fully capable of shocking the racing world with a victory due to his talent. The expectations should not be too high; however, Gibbs can certainly exceed them.