A Joe Burrow-Ja'Marr Chase reunion could lift the Cincinnati Bengals to new heights. However, Burrow isn't urging the team to draft his former LSU teammate. 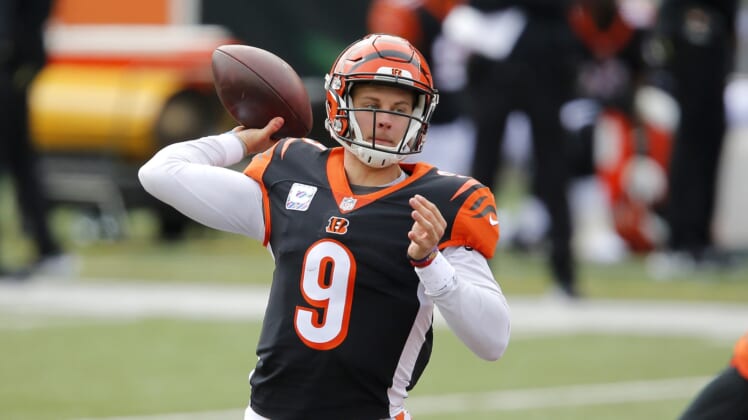 The Cincinnati Bengals hold the fifth overall pick in the 2021 NFL Draft, and contrary to recent rumors, quarterback Joe Burrow isn’t insisting that the team reunite him with his former LSU teammate Ja’Marr Chase.

It’d make sense for Burrow to lobby Cincinnati for his favorite target from college, especially since Chase is among the best receiver prospects in recent draft history. However, the Bengals are coming off a 4-11-1 season and have a decent receiving corps in place already, which may lead to a different first-round draft pick.

Pro Football Network’s Trey Wingo reported a text message exchange he had with someone in the Bengals organization, which suggested that Joe Burrow isn’t pining for Chase:

I can tell you that I got a text today from a member of the Bengals coaching staff that said, ‘I’ve seen that out there. Not sure where that came from. That’s not Joe, that’s not how he is at all. He gives us great intel on LSU guys but is respectful of his role as a player and ours as coaches and scouts.

The links between Burrow and Chase are obvious, of course, but the precocious signal-caller fared extremely well as a rookie even with fellow classmate Tee Higgins and an aging A.J. Green among his top receiving options. Higgins had a stellar 2020 campaign, and Tyler Boyd developed a strong rapport with Burrow.

In addition to Chase, though, star Alabama wideouts DeVonta Smith and Jaylen Waddle are considered worthy of being top-10 picks, as is endlessly talented Florida tight end Kyle Pitts. The temptation will be there for Cincinnati to give Burrow another premium weapon.

Don’t be surprised if the Bengals go in an entirely different direction, though — and for good reason.

Bengals may prioritize protecting Joe Burrow over adding a playmaker

Even the most casual NFL fan knows that Burrow’s maiden pro season got cut short by a major knee injury. Although Burrow has expressed optimism about returning to the field for Week 1 in 2021, it won’t be an easy objective to achieve.

The bottom line is, the offensive line that largely failed to protect Burrow must get better. That means Cincinnati is likely to either draft Oregon product Penei Sewell or Northwestern’s Rashawn Slater with the fifth overall pick.

In a perfect world, the Bengals would love to reunite Burrow with Chase and also absolutely guarantee he’d be protected better, but Sewell and Slater have such high floors as prospects. As the draft wears on, Cincinnati’s expectations from a rookie in the trenches have to be realistic.

Both Sewell and Slater project as instant starters. There’s a chance that the Bengals could trade down with a team that needs a quarterback and take Slater instead of Sewell, because the team does have two capable offensive tackles already in Jonah Williams and Riley Reiff. Slater seems more suited to slide inside to guard in the NFL.

Perhaps once the offensive line is adequately addressed, Cincinnati can try its luck with a pass-catcher in the second or third rounds. There’s thought to be considerable depth to the 2021 wide receiver class. Even if those Day 2 prospects don’t have the upside Chase has, Burrow seems like the type of QB who can elevate the skill players around him.

With three quarterbacks going off the board to kick off the 2021 NFL Draft, it’ll be utterly fascinating to see how the rest of the first-round action unfolds. The Bengals are at the center of that intrigue, and how they choose to build around Burrow will go a long way in determining how successful they can be with him while he’s under his rookie contract.