Jake Paul has some grand plans for what could come next with a win over Anderson Silva on Saturday night, and it includes two of the biggest stars in combat sports.

Paul will be back in the ring on Saturday night for a highly anticipated clash with UFC legend Anderson Silva. It is a fight that is even overshadowing the UFC tonight as it brings together an icon of the fight game as he battles the industry’s preeminent lightning road.

Many assumed Paul would be dispatched by former MMA champion Ben Askren, or one-time UFC welterweight king Tyron Woodley in their two bouts, yet the 25-year-old remains unbeaten and headlining one of the most notable fights in the second half of the 2022 combat schedule.

Also read: Jake Paul next fight – Problem Child is back on Saturday night

There is a real possibility the “Problem Child” hype and money train could be derailed by the “Spider” tonight. However, as a -260 betting favorite heading into the bout, there is an even better chance Paul moves to 6-0 by the end of the night. And when he is victorious, he has some big fights in mind for 2023.

In a Friday conversation with TMZ Sports, the Ohio native was asked about who could be next if he is successful against the MMA great, and the list includes superstars from boxing, MMA, and even his brother, Logan Paul.

“There’s a lot of people I think that would be wanting to fight me after this. This is the start of a bunch of mega-fights here. I think names like Canelo [Alvarez], [Conor] McGregor, [Nate] Diaz, Tommy Fury, KSI is still there. Heck, I could fight Logan Paul. Why not?”

– Jake Paul on next fight options

Of those possible matchups, the most likely is a rematch with KSI — after the two fought in an exhibition in 2018 — and Fury. Of the true combat sports stars, a scrap against new free agent Diaz is quite possible and seems like an eventuality in the next year. 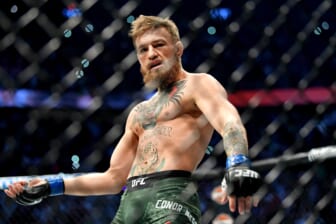 Unfortunately for Paul, due to contracts and general stature in the sport, bookings against former champions Alvarez and McGregor are highly unlikely in 2023.