The one-year experiment of Nate Bjorkgren as the Indiana Pacers’ head coach came to an abrupt end on Wednesday with Indiana’s brass deciding to fire the embattled head man.

Bjorkgren’s Pacers finished the 2020-21 season with a 34-38 record before falling to the Washington Wizards in the play-in tournament. This came after current Atlanta Hawks interim head coach Nate McMillan led Indiana to a 45-28 record in 2019-20.

Now that Pacers front office head Kevin Pritchard has made this move, reports suggest that he’s looking for an experienced head coach to replace Bjorkgren. The idea here is for the Pacers to keep most of their core players and attempt to run it back with a better head coach in 2021-22. If so, here’s a look at five ideal candidates.

This seems to be the most obvious choice. Stotts, 63, was fired by the Portland Trail Blazers after nine seasons. The move came following a first-round playoff exit at the hands of the Denver Nuggets. With that said, Stotts has the experience Indiana is said to be seeking. He led Portland to the playoffs in each of his final eight seasons in the Pacific Northwest and has been a coach in the NBA since 1994-95.

Chris Haynes of Yahoo! Sports noted on Wednesday that Stotts will be a candidate for the Pacers’ job. Hiring him would certainly help franchise cornerstone Malcolm Brogdon after the improvements we saw from fellow point guard Damian Lillard in Portland. That’s for sure.

Brown, 51, has served as Steve Kerr’s top assistant with the Golden State Warriors over the past five seasons, winning two NBA championships in the process. Prior to that, the respected veteran basketball mind was the head coach for the Cleveland Cavaliers (2005-10, 2013-14) and Los Angeles Lakers (2011-13). In fact, he’s earned six playoff appearances in eight seasons as a head coach.

What makes Brown an especially intriguing fit for the Indiana Pacers is the fact that he served as an assistant under then-Pacers head coach Rick Carlisle from 2003-05. He has a relationship with the organization and is deserving of another opportunity to be a head man.

Having starred for the Pacers over the course of a six-year span during the organization’s heyday, Jackson is still looking for that head-coaching opportunity. He led the Golden State Warriors back to relevance as their head coach from 2011-14 before the aforementioned Kerr took over. That included two playoffs runs after the Warriors had earned a trip to the postseason just once over the previous 19 years.

There’s some who think that the current ESPN analyst has been blackballed due to his religious beliefs. Based on the success Jackson had with Golden State, it’s hard to counter that point. Perhaps, the Pacers opt to give him that long-awaited chance.

Currently a top assistant with the Los Angeles Lakers, this Hall of Fame point guard took his name off the list of candidates for the Portland Trail Blazers’ job. Right now, we’re not sure if Kidd even wants to be given a third opportunity as a head coach.

If the respected basketball mind were to show interest in the Pacers’ job, there’s absolutely no reason why Indiana wouldn’t return the favor. We’re talking about someone who led the Brooklyn Nets back from the abyss to make the playoffs in 2013-14. He also helped oversee the improvements we saw from Giannis Antetokounmpo when Kidd was the Bucks’ head coach from 2014-18.

If the Pacers want experience, D’Antoni might very well be that guy. Prior to parting ways with the Houston Rockets following the 2019-20 campaign, he had served as a head coach in the NBA for 16 seasons. That included stops with the Denver Nuggets, Phoenix Suns, New York Knicks and Los Angeles Lakers — earning 10 trips to the postseason in the process. 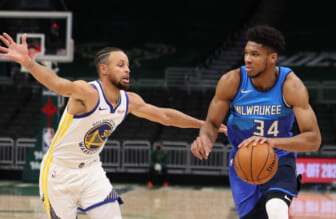 D’Antoni, 70, would also change up the fundamentals of Indiana Pacers basketball. He runs a high-octane and fast-paced offense dating back to a tremendous run with the Suns. Perhaps, this would benefit the likes of Malcolm Brogdon and T.J. Warren in Indiana.