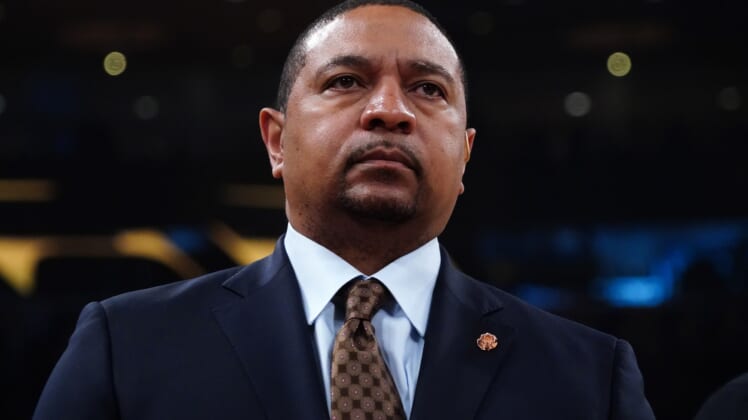 Former Golden State Warriors head coach Mark Jackson had a darn successful career with the organization from 2011-14, posting a 121-09 record while leading them to two consecutive playoff appearances.

Jackson’s tenure with Golden State came to an abrupt and shocking end after leading the team to a 51-31 record in 2013-14. He was ultimately replaced by Steve Kerr on the bench in Oakland. The rest is pretty much history.

Now years removed from his tenure with the Warriors ending, Jackson talked about wanting to get back into coaching. The ESPN on-air talent also suggested that Golden State has attempted to blackall him.

“I truly believe that the day will come when I have the opportunity to walk the sidelines again and lead a basketball team,” Showtime’s “All The Smoke” podcast, “For three years in Golden State, I had the time of my life impacting players, developing relationships and changing a culture. I truly was blessed to do that, and I look forward to the opportunity to do it again. I don’t believe that no man can blackball me.”

It has not made a ton of waves nationally, but the perception in the Bay Area is that Jackson was pushed out of his job due to his religious views on sexuality and gender.

“One particular issue was (Jackson’s) views on gender or marriage or what the bible says on your sexuality,” former Warriors star Andre Iguodala said last June. “The head of our business Rick Welts … he’s celebrated as one of the top execs in sports, on the business side, and he’s gay, so there was conflicts that were widespread.”

We’ll likely never have the real truth behind what led to the divorce between Jackson and the Warriors. What we do know is that Golden State has earned five consecutive Western Conference titles and three NBA titles since it parted ways with Jackson.

As it relates to Jackson, he wants back into coaching. One team back east could very well have interest in his services. Just don’t expect Golden State to vouch for the man.