Did the Houston Texans miss out on their original QB draft target?

The Houston Texans have taken a lot of heat for making quarterback Davis Mills their first selection of the 2021 NFL Draft at No. 67. But is it possible their original target was drafted one spot ahead of Mills?

Vikings beat Houston Texans to the punch on draft day

Chris Tomasson of the Pioneer Press reports that’s exactly what happened. While the Texans reportedly planned to draft San Antonio native Kellen Mond from Texas A&M with their top pick, he never made it that far.

“(There was a) phone call from his agent, text message, and the agent said, ‘Hey, the Houston Texans are getting ready to select (Mond) at pick 67,’ ” Mond’s father, Kevin, said. “So, we’re sitting (at the San Antonio family home) on the couch and (Mond) gets the phone call a couple of minutes later and it’s a team.

“Then, when he hung up the phone, he goes, ‘I’m going to the Vikings.’ The Texans had already told his agent they’re getting ready to take him at pick 67. The Vikings happened to have the pick 66.”

Perhaps if the Texans had selected Mond, the former Texas A&M Aggie would’ve had a chance to compete for a starting role. Instead, the Minnesota Vikings had plans for Mond to be their backup behind Kirk Cousins.

Neither situation is particularly ideal, but that’s the life as a backup quarterback in the NFL. In Minnesota, Mond will have to scratch and claw his way into the starting lineup. The Vikings appear to have a young stable of weapons for Mond to thrive with. 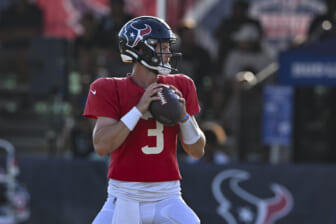 In Houston, the rebuild has yet to officially begin. Maybe in the end, Mond ended up in the better scenario.

The Texans could very well select their next franchise quarterback in the 2022 draft and then Mills and Mond would both be backups either way.

Who has a higher ceiling between Mond and Mills?

While this is purely subjective as opinions are all over the place when grading quarterback prospects, most would suggest Kellen Mond has a higher ceiling long-term than Davis Mills. Even in the short-term, Mond should be seen as the more pro-ready talent.

Mills came from a strong atmosphere with Stanford QB guru David Shaw coaching him up, but a lack of arm strength could make the transition to the next level a tougher task. Whereas Mond has more zip on his ball, though his throwing motion may need some work.

If you ask PFT’s Chris Simms, he’d say Mond is a first-round talent, but if more teams felt that way, he wouldn’t have lasted into the third round. Mond may very well develop into a nice prospect in the NFL, but it could take some time.

In reality, neither quarterbacks are ideal picks to see major playing time as rookies in 2021. But if reports are true and if the Texans truly did have their eyes on drafting Mond over Mills, it will be tough to not compare the two throughout their careers.

The Houston Texans wanted Kellen Mond, where does that leave Davis Mills?

For now, Davis Mills only needs to worry about one thing. Himself.

As it stands, whether Deshaun Watson suits up for the Houston Texans in 2021 or not, Mills is a backup. Longtime veteran QB Tyrod Taylor is fully expected to enter the season as the Texans starting quarterback.

Whether Mond was there instead of Mills wouldn’t change that fact. Both would be seen as a longshot to start Week 1. Taylor is more than capable of starting in the NFL and even has a winning record (24-21-1) to show for it.

Entering the draft, Mills was always seen as a project no matter where he landed. It’s going to be up to him to change the narrative and show the Texans made the right call in the end.

If not, Kellen Mond will always lurk in the shadows as Texans fans wonder what could have been. But first, he too will have to have some success. For now, this is just a random footnote to the start of their NFL careers.