Green Bay Packers star Aaron Rodgers is no longer the only star disgruntled with the franchise with All-Pro wide receiver Davante Adams now breaking off contract talks with the team.

As the Packers attempt to resolve an ongoing dispute with Rodgers, they also started negotiating an extension with their top offensive weapon. Adams, who is in a contract year, was hoping to become the highest-paid wide receiver in the NFL with an extension.

According to NFL Network’s Ian Rapoport, talks have now broken off and the two sides are now in a bad place right before training camp. 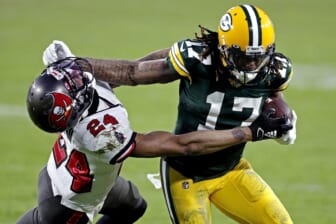 The Athletic’s Matt Schneidman reports that Green Bay doesn’t want to recognize that figure as a mark it needs to approach in contract negotiations. As a result, with Adams’ representatives fully aware of the rising salary cap, talks broke down after months of negotiations.

Both sides find themselves in a difficult situation. Even without extensions for Adams and Rodgers, Green Bay is projected to be $34.5 million over the 2022 NFL salary cap. They are also dealing with uncertainty at quarterback, wondering if Rodgers will play in 2021 or if Jordan Love will be thrust into the starting role earlier than they want.

Adams is also thinking about his future. If Rodgers doesn’t play this season, it will significantly impact the star receiver’s production in a contract year. A steep decline in his stats will greatly impact what teams would offer him on the open market.

“I’m from East Palo Alto, California. I grew up with zero dollars. I’m not forfeiting any of my money that I earned.”

The NFL’s new collective bargaining agreement makes a training camp holdout unlikely for Davante Adams. He would be required to pay a $50,000 fine for every day of training camp he skips, so he should be on the field when camp opens.

After Rodgers blasted the Packers’ front office and organizational culture, a criticism shared by teammates, it’s become evident the Packers have a lot of problems to address before the season even begins.