The Green Bay Packers are already dealing with trade rumors surrounding Aaron Rodgers, hanging a dark cloud over the franchise as it prepares for the 2021 NFL season. Now, with Rodgers’ future in Green Bay increasingly uncertain, Davante Adams could be next.

While everyone knew Rodgers wasn’t happy in Green Bay, it came as a surprise for many fans to learn that he wanted a trade. Never in NFL history as a reigning NFL MVP been moved the following offseason, but the 37-year-old quarterback isn’t happy with general manager Brian Gutekunst and believes there are better opportunities to compete for a Super Bowl elsewhere.

The Packers remain hopeful a resolution can be reached, with a new contract and promises for a win-now approach could convince Rodgers to stay with the franchise. But many around the NFL believe the damage is done and he’ll never suit up for Green Bay again. As all of this happens, All-Pro receiver Davante Adams has started contemplating his future.

Adams, who will become a free agent next offseason, has reason to be concerned. He’s become one of the NFL’s best receivers with one quarterback and they have outstanding chemistry. If Rodgers departs, Jordan Love would likely step in and there are concerns about his ability to be an NFL starter.

CBS Sports’ Joel Corry, a former NFL agent, raised the possibility of Adams being traded in 2022. It’s a theory based on where things stand between the two sides and the precedent we’ve seen from star players in the past.

Davante Adams contract and its impact on his future

If the Packers convince Rodgers to stay, signing him to a multi-year extension, Adams will happily re-sign in Green Bay. While the former second-round pick’s NFL career started slowly, recording 88 receptions for 929 receiving yards and four touchdowns in 29 games, he has become a star ever since.

The 28-year-old has made the Pro Bowl in four consecutive seasons and played a pivotal role in Rodgers’ MVP season. He led the NFL in receiving touchdowns (18) and yards per game (98.1), despite missing nearly three games due to a hamstring strain.

If Rodgers isn’t back in Green Bay, there would be very little incentive for Adams to stay. He’ll be a free agent entering his age-29 season, right in the prime of his NFL career. Four wide receivers (DeAndre Hopkins, Julio Jones, Keenan Allen) all make $20-plus million per season, a figure Adams will easily reach on the open market.

Green Bay could prevent him from testing free agency by using the franchise tag, a likely scenario even with their history of rarely using it. But the star receiver could then refuse to sign the tender, holding out and asking for a trade. With the team in need of a restart, a trade could become very possible.

Ultimately, it’s in the Packers’ best interest to extend both Rodgers and Adams. While it will be expensive and might hurt this team a bit in the future, that’s the approach Super Bowl contenders are making. 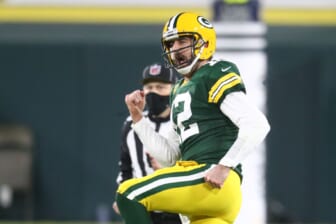 Also Read:
Aaron Rodgers ‘more likely than not’ to play for Packers in 2021