While there was recent speculation that Aaron Rodgers could be back with the Green Bay Packers next season, a new report claims both sides are also wise to the fact that a trade could be an even more “real possibility” in the offseason.

Aaron Rodgers was on top of the world heading into the 2022-2023 NFL season. He was the league’s reigning MVP for consecutive seasons, he became the highest-paid player in the sport, and the Packers were expected to be formidable again in the NFC. However, things soured quickly once regular-season games started to be played.

The departure of superstar receiver Davante Adams in the offseason proved to be devastating as the offense struggled for much of the season, and the quarterback and his receiving corps didn’t develop consistent chemistry until late in the NFL schedule.

Also Read: Buccaneers players would be ‘surprised if Tom Brady is back’ in 2023

The disappointing results mixed with a frustrating season finale loss, with a playoff spot on the line, have led many to wonder about the future of the successful relationship between the Green Bay Packers and their legendary QB.

Well, it seems despite public hopes that the two sides would continue their partnership next, ESPN NFL insider Adam Schefter reports that an Aaron Rodgers trade in the offseason is as real now as it’s ever been.

“Both sides are fully aware that a trade is a very real scenario this offseason. The Packers are expected to move on from certain players, which Aaron Rodgers probably will not like. The issue here will be the $110 million left on his contract and which team could afford it. But there is a real possibility that at some point this offseason Aaron Rodgers is going to be traded.”

The key part of that report is the massive amount of money left in the remaining two seasons on Rodgers’ contract. Meaning it will be a difficult task to find a team with enough salary cap space to take on that money, while also being a group the future Hall-of-Famer is willing to continue his career playing for.

The Chicago Bears, the team with the most cap space ahead of next season, are out since they won’t be a contender next season. The New York Giants will have a lot of cap space as well, but chances are they aim to retain QB Daniel Jones in the offseason. With that in mind, here are three possible teams that could be a part of a potential Aaron Rodgers trade.

The Derek Carr era in Las Vegas is officially over and the Raiders are expected to trade him in the offseason. Considering the massive contract attached to him next season, a swap of QBs could be appealing for them and the Green Bay Packers.

For the Packers, there is much to gain since Carr would give them a chance to still be competitive next season. But as the side that’s getting the lesser of the two QBs, some worthwhile draft picks would need to be attached in a swap. Meaning there are short and long-term benefits for Green Bay in a potential trade. 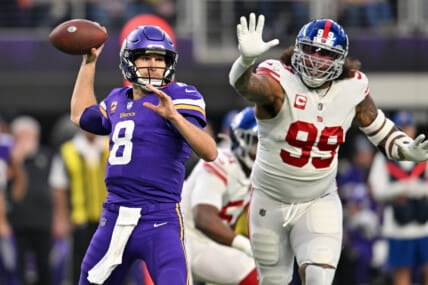 The Atlanta Falcons is another franchise that will have a great deal of salary cap space in the offseason. The team was competitive and in the hunt for a playoff spot late into the season, due to their impressive run game and talented skills players. However, the QB spot failed them mightily in 2022-2023.

Rodgers would be a massive upgrade. The roster’s upside, plus playing in warmer weather, could appeal to the 39-year-old NFL great.

The New England Patriots are also expected to have a large amount of cap space entering next season (via Spotrac). There are some doubts if Mac Jones really is their long-term answer at QB, and with Pats owner Robert Kraft making it known he has been unsatisfied with the team’s recent results, a move for Rodgers isn’t out of the question.

Receiving Jones, and some worthwhile draft capital could certainly be enough for the Green Bay Packers to gladly send their QB to the AFC next season.