Immediately prior to suggestions that Green Bay Packers quarterback Aaron Rodgers was not happy with his organization and wanted to be traded, the reigning NFL MVP spent two weeks hosting “Jeopardy.”

Rodgers joined other celebrities in that of news media personality Anderson Cooper and former “Jeopardy” champion Ken Jennings in taking turn guest hosting the show. In reality, these are pretty much tryout to see who will replace the late-great Trebek in a full-time role.

Initially, it seemed like Aaron Rodgers had a real opportunity to become the full-time host. It’s something that he has gone on record indicating he wants. Hosting the legendary game show also wouldn’t interfere with Rodgers’ football schedule. Unfortunately for the future first ballot Hall of Famer, that might not be the case. 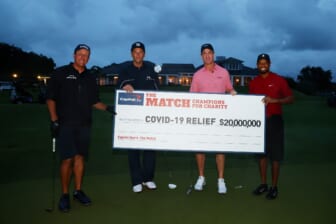 These numbers from Sports Business Journal (h/t Pro Football Talk) are not great when it comes to “Jeopardy” TV ratings with Rodgers hosting compared to other celebrities.

Meanwhile, Rodgers drew 9.193 million viewers per show in his first week hosting compared to 9.081 million in his second week.

As you likely already know, ratings are pretty much everything when it comes to networks and executive producers. Drawing roughly a million viewers less than the height of Jennings’ guest-host run is not great.

All the while, a recent poll of “Jeopardy” viewers indicated that 22% want Jennings to host compared to 16% for Rodgers. 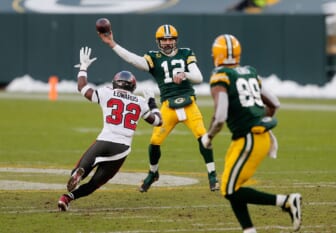 In no way does this mean Rodgers is out as a full-time host of “Jeopardy.” Rather, it speaks to the complexities of him attempting to make it in the entertainment industry.

From a pure logistical standpoint, Aaron Rodgers prefers to be traded to either the Denver Broncos, Las Vegas Raiders or San Francisco 49ers. It’s not a coincidence that all three are west coast teams and “Jeopardy” is taped in Southern California.