The (4-12) New York Giants‘ disastrous 2021 season will finally come to an end this Sunday as they host the (6-10) Washington Football Team.

There is no intrigue in this game that features two of the most disappointing teams in the NFL.

However, there are four storylines for the New York Giants heading into the season finale.

Will this be Joe Judge’s last game as head coach?

It was rumored that Judge’s job was safe and that he’ll be back next season. But that was before the Giants’ 29-3 debacle against the Chicago Bears where they had minus 10 yards passing.

No matter what Judge might say in his postgame press conference, the team is regressing. Judge’s record as coach is 10-22, and every other team in the NFC East has made the playoffs during his tenure.

If that wasn’t embarrassing enough, the Giants can tie a dubious record on Sunday as with a loss they will tie a franchise record for most losses (13) in a season, that they set in 2017 when they went 3-13.

If the Giants have another embarrassing performance on Sunday, it will be a hard sell for John Mara to try to convince fans that Judge is the right man to turn the franchise around. 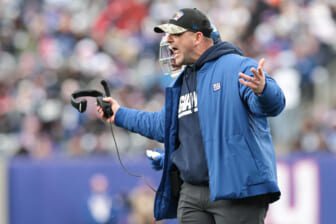 Several players might be playing their final game for Big Blue

We all know that the Giants roster is in dire need of upgrades on both sides of the ball. But they will also need to replace players that could be suited up for New York for the last time on Sunday.

Evan Engram, Will Hernandez, and Lorenzo Carter are all free agents, as well as Jabrill Peppers who is currently on IR. The Giants will need to hit on their draft picks to replace these players and upgrade the roster as they will have limited cap space. 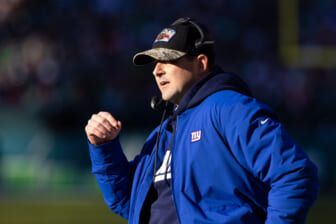 Also Read:
NFL insider says ‘everything is on the table’ for New York Giants offseason changes

Jake Fromm is poised to make his second NFL start as Mike Glennon is out with a wrist injury. In his previous start in Week 16 against the Philadelphia Eagles, Fromm looked overwhelmed completing just 6-of-17 passes for 25 yards and an interception.

After the Giants’ putrid passing performance a week ago, the bar is set as low as it can be for Fromm. Can you use this chance and put forth a respectable performance so that he deserves to be on an NFL roster? Or will his second start be another disaster?

What will the New York Giants’ fan reaction be on Sunday?

After having to endure another painful double-digit loss season, it’s expected that MetLife Stadium will be half empty on Sunday. For the fans that do decide to attend will they sit quietly in the cold, or will they voice their frustration with “Joe Must Go” chants?

No owner wants to see their stadium half-empty with the fans booing and letting their frustrations be known. If it’s an empty and ugly scene in the stands on Sunday, this could prompt John Mara to do a thorough house cleaning. 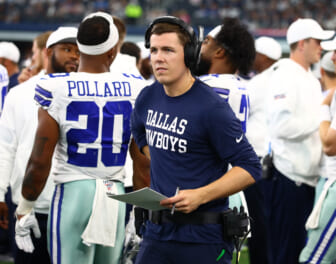