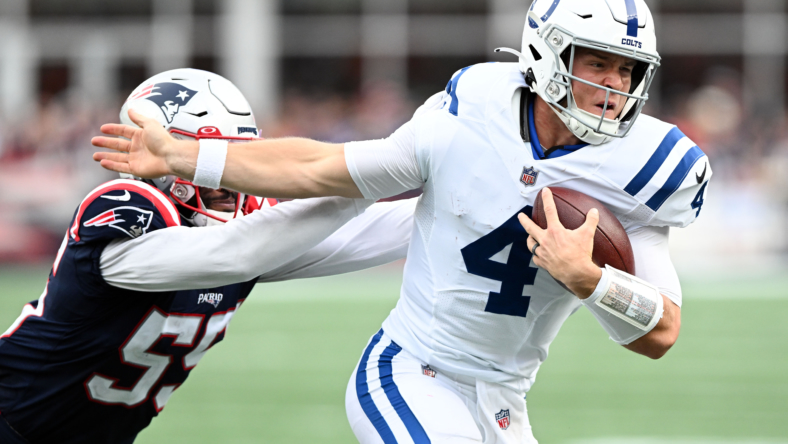 The Indianapolis Colts are now on a three-game losing streak after losing to New England. This week’s loss might just be rock bottom for the organization. However, that statement could have been applied to the second loss against Tennessee or last week’s loss to Washington. Yet, this team seems to one-up the previous week’s performance.

With that being said, the blame cannot be solely put on quarterback Sam Ehlinger. This is a former sixth-round pick who is now being asked to save this disastrous season in spite of the organization’s ineptitude. Even the great Peyton Manning would struggle to win football games as bad as this team is currently constructed. Anyways, let’s take a look at Ehlinger’s performance from Sunday.

Sam Ehlinger’s lack of a deep ball has become obvious

Coming into the NFL, a knock on Ehlinger was his poor accuracy on deep throws and the lack of NFL arm strength. Now, to be fair, he worked with quarterback guru Tom House to improve his ability this past off-season. Unfortunately, more work still needs to be done if Ehlinger is to be an NFL starting quarterback.

There was a play in the second half where he was flushed from the pocket to his right. He kept his eyes downfield looking for a receiver. In the end, he ended up rushing for a few yards. However, upon review of the play, there was a Colts wide receiver streaking down the left hash mark ahead of his defender.

Color commentator Adam Archuleta highlighted this play and called for Ehlinger to throw the ball to the receiver. But Ehlinger made the correct decision, as the safety was trying to bait him into the throw for an interception. However, this play highlights a weakness in his game. More teams will take note of this and begin to play closer to the line of scrimmage.

Related: Jeff Saturday hiring leaves everyone wondering what the Indianapolis Colts are doing

“I wish you had more time”

This is a line from a great and underrated movie, Man on Fire. This has been a theme throughout this season. Neither Ryan nor Ehlinger has had enough time in the pocket to be able to read the defense and be able to throw the ball. In this game, Ehlinger was sacked nine times. But again, offensive line coach Chris Strausser is doing a fine job, and former offensive coordinator Marcus Brady was the problem. Or so they say.

In this game, Ehlinger was able to complete 15-of-29 passes for 103 yards and one interception. To be fair, the interception wasn’t his fault. Tight end Kylen Granson should have caught the ball instead of having it bounce off his hands. Ehlinger also rushed five times for 39 yards. Considering the pass-rush duo that Las Vegas has, fans and Ehlinger should expect another week of him running for his life.

Nothing has changed for Ehlinger’s career outlook

Coming out of the draft, many scouts believed Ehlinger was destined to be a backup quarterback in the NFL. Two starts in, and nothing has changed that outlook. This is not meant to be a knock, as being able to play a long time in the NFL as a backup quarterback is something few can say they did. Jim Sorgi did it and then parlayed his work into being the organization’s color commentator for the radio broadcast.

Circling back to Ehlinger’s stats from yesterday. He threw for 103 yards; however, he was sacked for a total loss of 60 yards. This brings his net passing number to 43 yards. The year is 2022, and the Colts’ starting quarterback passed for a net total of 43 yards, with the longest pass being 23 yards. However, those 23 yards were mostly picked up by Alec Pierce’s run-after-the-catch ability.

Again, this isn’t all Ehlinger’s fault. He is doing the best that he can with what he has. In fact, he is showing that he should be on the roster moving forward as he is someone who is part of the solution and not part of the problem.

It wouldn’t be shocking to see Ehlinger starting Week 1 in 2023. GM Chris Ballard has experienced teams who build all around the quarterback position and just ask the QB not to make mistakes. This is something that Ehlinger will excel at. He’s showing that he values the football and is making smart decisions. Unfortunately, the smart decisions aren’t very productive because the team has no game-breakers.

As previously stated, the Colts will take on Las Vegas next week. It will most likely be another ugly game. This is a matchup that, despite how poor the Colts have been playing, can win, as Las Vegas has blown three 17-point leads this season. And the Colts love to dig holes and then try to climb out of them.