When Las Vegas Raiders star quarterback Derek Carr addressed the media with tears in his eyes after a 25-20 loss to the Indianapolis Colts, we saw a more candid version of the QB. Yes, it sounds like he called out unnamed teammates who lacked the commitment to play at their best, but he may have also galvanized the locker room.

Let’s read the quote that made headlines around the country two weeks ago:

“It’s hard, knowing what some guys are doing. Like I said, just to practice, what they’re putting in their bodies just to sleep at night, just so we can be there for each other. And I wish everybody in that room felt the same way about this place, and as a leader that pisses me off—if I’m being honest.”

Most of us extracted a negative point of view from this, which is expected following a loss to a team that just hired a first-year head coach in Jeff Saturday several days before the game.

Related: NFL standings: Find out which teams are in first place after Week 11

But perhaps Carr’s passionate presser ignited a fire within his club. During that post-game exchange with reporters, he did say that the team addressed some in-house issues amongst each other. Nonetheless, the Raiders quarterback put all of it on the table, giving everyone a piece of his mind.

Last Sunday, the Raiders pulled out a 22-16 overtime victory over the Denver Broncos. No, they didn’t beat a top NFL team, but we all know division games carry significant meaning, especially between bitter rivals with a deep-rooted history.

Most importantly, after the game, Raiders players chanted “D.C.” as Carr walked into the locker room and embraced head coach Josh McDaniels.

Of course, a win can temporarily cure some ills in a locker room. With that said, Carr’s leadership seems unfazed by Vegas’ 3-7 start and the quarterback’s decision to indirectly call out some of his teammates who didn’t show enough urgency in the first two-and-half months of the season.

Carr’s leadership a factor in his Las Vegas Raiders future

When general managers and head coaches make offseason decisions on key positions, including the most important job on the roster, they also have to read the room.

Does the quarterback have the pulse of his team? Do players believe in him in critical situations? Is he well-respected among veterans and young players? Right now, Carr seems to check all those boxes.

Aside from his wide-open 35-yard pass to wideout Davante Adams for the win, Carr completed 23 out of 37 passes for 307 yards and two touchdowns against the Broncos’ third-ranked pass defense, logging his third-best passer rating (106.5) of the season. That’s how a leader is supposed to play after a heartfelt press conference about accountability and effort. 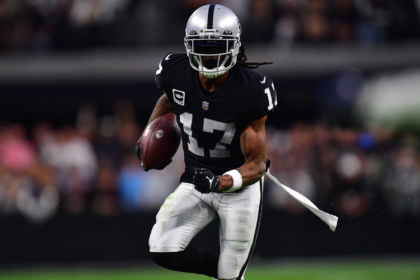 Players can respect Carr’s honest words even more so after he walked the walk in the following game against one of the league’s best pass defenses. It’s almost as if Carr demonstrated that’s how it’s done on the field, and his teammates showered him with respect for taking the lead by example.

If the Raiders travel to Seattle and lose in embarrassing fashion to the Seahawks, we’ll move back to square one at a point when guys must look themselves in the mirror again, but the Raiders had the type of win that can at least change the temperature of the locker room, but they have to sustain that momentum.

While in the locker room for the postgame celebration, general manager Dave Ziegler had a front-row seat to observe how players responded to Carr’s presence.

If you’re one of those people who strongly believe that the Las Vegas Raiders will move on from Derek Carr in the offseason, don’t underestimate how Ziegler and team brass view that reaction to him as a team captain, quarterback, and leader of the squad.