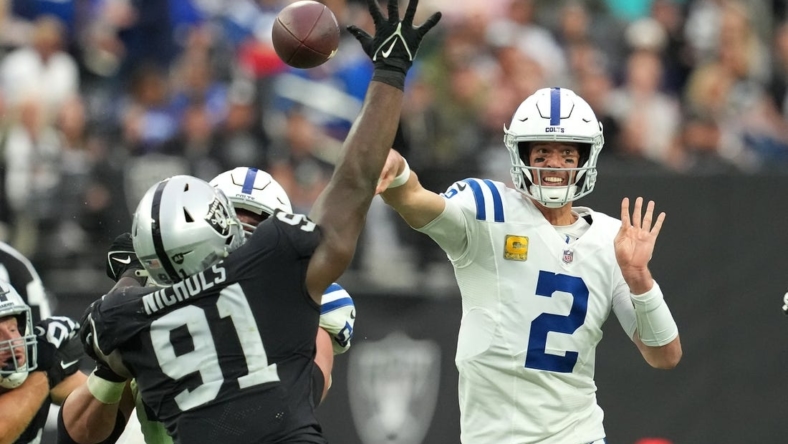 Matt Ryan’s 35-yard touchdown pass to Parris Campbell with just over five minutes left rallied the visiting Indianapolis Colts to a 25-20 win over the Las Vegas Raiders on Sunday.

Ryan went 21-for-28 passing for 222 yards with one touchdown passing and one rushing, while Jonathan Taylor rushed for 147 yards, including a 66-yard touchdown, on 22 carries.

Campbell finished with seven receptions for 76 yards as the Colts (4-5-1) ended a three-game losing streak by giving interim coach Jeff Saturday the first win of his coaching career.

Derek Carr went 24-for-38 passing for 248 yards and two touchdowns, while Davante Adams finished with nine receptions for 126 yards for the Raiders (2-7), who dropped their third straight game. Josh Jacobs rushed for 78 yards and a score on 21 carries.

Ryan was playing his first game since injuring his shoulder against the Tennessee Titans on Oct. 23. It was Taylor’s first game after being sidelined with an injured ankle following a loss to the Washington Commanders on Oct. 30.

The Colts responded two plays later. Taylor broke free for a 66-yard touchdown run, giving Indianapolis a 19-14 lead after a failed two-point conversion with just over a minute left in the third quarter.

The Raiders regained the lead when Carr hit Adams on a 48-yard touchdown for a 20-19 advantage after their own failed two-point conversion with 11:36 left in the game.

Ryan gave the Colts the lead for good when he found Campbell across the middle for a 35-yard touchdown with 5:07 left. They failed to convert on another two-point try.

The Raiders’ final drive ended when Stephon Gilmore broke up Carr’s fourth-down pass intended for Adams in the end zone with 47 seconds left.

Chase McLaughlin’s 48-yard field goal extended the Colts’ lead to 10-0 with 12:38 left in the second quarter.

The Raiders pulled to within 10-7 when Foster Moreau made a diving catch in the end zone to snare Carr’s 4-yard pass with 58 seconds left in the half.

McLaughlin’s 48-yard field goal as time expired in the first half pushed Indianapolis’ advantage to 13-7.