Longtime Arizona Diamondbacks left fielder David Peralta is slated to hit free agency this coming winter. As such, it wouldn’t be a surprise if the last-place team moved off the veteran.

A Gold Glove winner back in 2019, Peralta might be limited to left field and designated at this stage in his career. The 34-year-old veteran is also likely to be a mere rental. This will lower what Arizona demands in a potential deal ahead of the Aug. 2 MLB trade deadline.

With that said, there’s still going to be a rather robust market for a player who can still perform at a high level both at the plate and in the field.

That .750 OPS would be Peralta’s highest figure since 2019. He’s also on pace to hit his most homers since the veteran belted 30 back in 2018. Below, we look at three ideal David Peralta trade scenarios leading up to the deadline.

New York has been linked to the likes of Kansas City Royals All-Star Andrew Benintendi. That still remains a possibility. However, he would cost a lot more than Peralta in a trade. With the Yankees potentially looking to add another starting pitcher to the mix, going with a mid-tier option in left field could make a ton of sense. 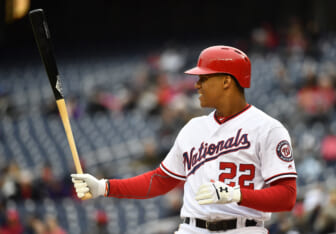 Also Read:
Juan Soto to the New York Yankees, how a trade might work

In return, Arizona acquires New York’s second-round pick in the 2021 MLB draft. Beck starred for Stanford throughout his four-year college career. That included him pitching to a 9-3 record with a 3.15 ERA while striking out 143 in 108.2 innings back in 2021. He’s viewed as a flame thrower with a tremendous amount of upside.

The Diamondbacks also acquire a former Yankees top prospect in Florial who has not lived up to expectations in the Majors. Perhaps, a change of scenery could do him well with the Dominican native finding every-day play in left field for Arizona.

We know that St. Louis has been linked to Washington Nationals star Juan Soto. It also has the assets to pull off a move of that ilk. But if the Cardinals want to go a cheaper route, Peralta would make sense.

St. Louis’ trio of regular outfielders have hit a combined 15 homers this season. Tyler O’Neill (.664 OPS) has struggled as the Cardinals’ starting left fielder. Obviously, Peralta would be an upgrade. He’d also come cheap from a financial perspective

St. Louis entered Monday’s action with a 51-46 record and 2.5 games behind the Milwaukee Brewers in the NL Central. It is also in the midst of the NL Wild Card race. Front office head John Mozeliak needs to add some reinforcements.

This could potentially be the best package that Arizona could hope for. It includes two top-30 Cardinals prospects in Thomas (15th) and Gomez (25th) who are both currently playing Triple-A ball.

Thomas, 24, was a fifth-round pick out of Georgia Tech back in 2019. He’s pitching to a solid 5-3 record with a nearly a strikeout per inning in 14 starts at Memphis. Meanwhile, Gomez could potentially take over immediately in left field for Peralta. Before getting the call to Memphis, the 23-year-old outfielder was hitting .321 with 23 homers and 54 RBI in 60 Double-A games.

While Duvall it out for the season with a wrist injury, the defending champs have more than capable internal options to replace the veteran. In no way does this mean always-active general manager Alex Anthopoulos won’t kick the tires on Peralta.

Peralta seems to fit what the Braves like to do at the trade deadline. That is to say, acquiring potential rentals on the cheap without tapping too much into a farm system that needs to be rebuilt.

In this scenario, Atlanta sends its 17th-ranked prospect (Wilson) and 20th-ranked farmhand (Dodd) to the desert.

Wilson, 26, would join Arizona’s bullpen immediately. The 26-year-old reliever is pitching to a combined 2.34 ERA with a 1.06 WHIP between Double-A and Triple-A on the season. He could end up being a closer of the future.

As for Dodd, the former third-round pick in 2021 has made his way up to Double-A. He projects as a starter moving forward, pitching to a 3.22 ERA with 98 strikeouts in 95 innings this season.