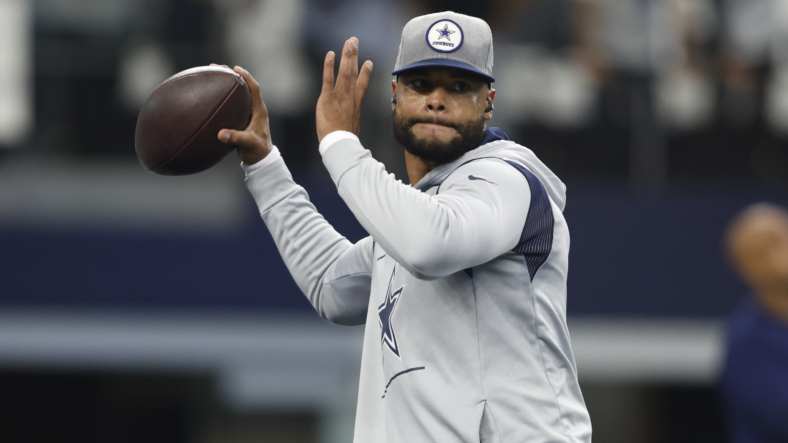 Dallas Cowboys quarterback Dak Prescott won’t be on the field for a pivotal Week 2 matchup against the Cincinnati Bengals, but he will be assisting the offense and starter Cooper Rush on Sunday.

A week after Prescott fractured his thumb on Sunday Night Football, the face of the Cowboys’ franchise will be inactive for the matchup against the Cincinnati Bengals. It’s a massive blow before facing the reigning AFC champions and Dallas will be dealing with the absence of its franchise quarterback for weeks.

While Prescott can’t play for the foreseeable future, he will still be helping his team. One of the smartest quarterbacks in the NFL and a leader in the locker room will be using his voice and football IQ to help Rush and the offense throughout Sunday’s game.

According to NFL Network’s Ian Rapoport, Prescott participated in every game plan meeting for Week 2. He will also be on the sideline with a headset on Sunday, providing feedback to Rush and assisting teammates whenever they need it during the game.

Prescott’s role with Rush is especially noteworthy. Dallas only added Will Grier to its roster, meaning there is very little experience on the depth chart at quarterback. So, Prescott is stepping in as Rush’s quarterbacks coach and he will go over plays with the Cowboys’ starting quarterback during the game.

By not placing Prescott on injured reserve, Dallas took an action that displayed its confidence in an early return. Jerry Jones believes his starting quarterback can return far ahead of schedule, but those with extensive knowledge of the injury believe it will take at least a month for a return.

According to Rapoport, the timeline set by those with knowledge of the injury and the surgery Prescott received believed 4-6 weeks is reasonable. It leaves the door open for the face of the Cowboys’ offense to start on Oct. 16 against the Philadelphia Eagles.

Following surgery, Prescott needs 7-10 days for his wound to heal and then team doctors will monitor the swelling around the thumb for up to two weeks. Only after the swelling goes down can Prescott take significant steps toward a return and will a clear timetable for his return to emerge.

Barring a disastrous performance from Rush and the Cowboys’ offense on Sunday, there is unlikely to be a significant addition at quarterback. The Cowboys aren’t pursuing a Jimmy Garoppolo trade and with limited options in free agency, Dallas is prepared to stick with the quarterbacks it already knows.