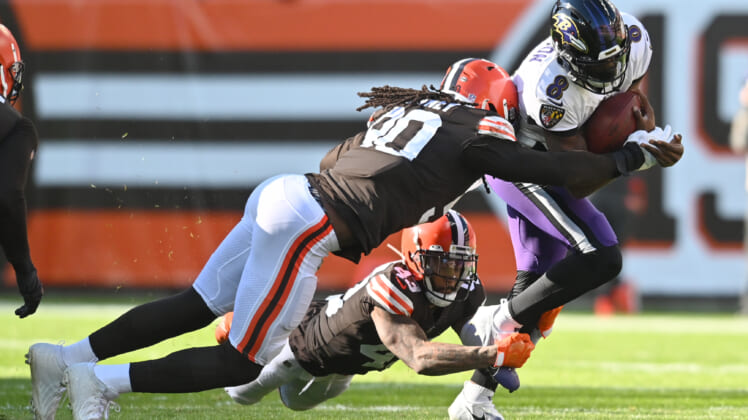 The Cleveland Browns have wanted to re-sign edge rusher Jadeveon Clowney since the NFL offseason began. While the veteran remains a free agent with minicamps closing in, there is still confidence he returns to Cleveland.

Remaining a free agent into the summer is nothing new for Clowney. The 6-foot-5 defensive end has a history of waiting until late in the offseason before signing a contract.

The Browns are fully aware of Clowney’s process. After pursuing him in 2020 and not landing him, Cleveland made another run last offseason. Finally, the former No. 1 pick signed a one-year contract on April 14. After taking a patient approach, the Browns have recently been pushing to get a deal signed.

While it seems nothing is imminent, Albert Breer of Sports Illustrated wrote that Cleveland is ‘pretty confident’ Clowney will return to the organization. The only scenario they could see him leaving would be if a team close to South Carolina pursued him.

The Browns have the financial wiggle room to sign him, currently sitting at $27 million in cap space. All of that is even before they work out a resolution with quarterback Baker Mayfield, with a buyout feeling increasingly likely.

Clowney should be viewed as the final big piece for the defense before Cleveland is ready to roll for summer practices. If he is on board, the defense should be a top-12 unit in 2022 and the Browns could compete for the Super Bowl if Deshaun Watson avoids a suspension this year.

Given Clowney’s value to the team and how nicely he fit opposite Myles Garrett last season, Cleveland can afford to be patient with a player they know fits everything they want.