Clearing COVID-19 protocols was just one more bout with adversity Clemson wide receiver Justyn Ross had to endure before making his official return to the Tigers’ practice field this week.

Ross passed through that threshold, and finally came back after a spinal injury suffered during spring practices in 2020 almost ended his football career. With a new lease on football life, Ross said he’s never felt better.

“I feel like the same old J-Ross,” Ross said, per The Clemson Insider’s Davis Potter. “Just that I’m that same old, explosive player. Same old physical strong explosive player and that I can take a hit. […] If it’s up to me, I’m ready to play a full four-quarter game.”

This has to be amazing for Tigers fans to hear, as Ross will join a new-look offense that no longer features Trevor Lawrence, as sophomore D.J. Uiagalelei prepares to take over at quarterback. 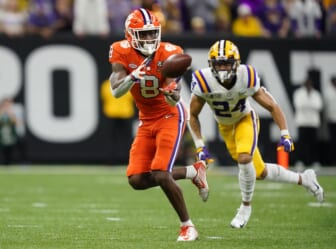 Justyn Ross’ stats were impressive right out of the gates, as made an immediate impact as a freshman for Clemson during the 2018 campaign, racking up 1,000 yards receiving on just 46 receptions and nine touchdowns. His explosiveness and huge catch radius thanks to a 6-foot-4 frame give Ross a phenomenal skill set.

Ross’ optimistic outlook and his feeling he can play a four-quarter game from the jump would be invaluable if it’s proven to be true in the coming weeks. Clemson opens the season against Georgia, which could be the toughest matchup on the Tigers’ entire schedule.

After another solid season thereafter, Ross unfortunately succumbed to an injury that definitely almost ended his career. He was going to enter his junior season with a real chance to be a first-round NFL Draft pick, slated to be the go-to target in Clemson’s passing game with Tee Higgins moving on to the pros.

Instead, it was a long wait, but Ross said in the aforementioned report that he “always had faith” he’d pull through and eventually play football again. That determination has now been rewarded, as Ross persevered through rigorous rehab and seems to be as close to 100% as you can be entering the 2021 season.

Despite losing Lawrence, expectations are still sky-high for the Tigers. That’s thanks in part to Ross’ return to action and Uiagalelei shining in two starts last season, earning him Heisman Trophy hype and a spot among the NCAA’s best QBs already.

Clemson is ranked second in our top 25 college football rankings, and opened in the No. 2 spot in the preseason coaches poll as well.