Clemson Tigers star Justyn Ross, who missed the entire 2020 season with a spinal injury, announced Friday on social media that he’s been cleared to play for the 2021 campaign.

Ross took to Instagram to officially announce the news of his return, and his post read as follows:

“I am so thankful to my family, coaches and teammates for their support, to the Clemson trainers and doctors for their hard work, and to my surgeon Dr. Okonkwo for believing this was possible. I’m grateful I had access to so many experts to help me heal and give me the chance to determine my own future. I never take for granted the opportunity to wear that No. 8 jersey here at Clemson, and I am so blessed to be able to put it on again and go play the game I love.”

During his freshman season in 2018, Ross exploded onto the scene with a 1,000-yard year and nine touchdowns on only 46 receptions (21.7 average) and helped the Tigers to a national championship.

After another solid showing as a sophomore, it was expected that Ross would emerge as Clemson’s clear No. 1 receiver with Tee Higgins moving on to the NFL. Unfortunately, Ross went down in spring workouts, as two of his vertebrae were fused and he had a bulging disc.

The dynamic 6-foot-4 pass-catcher’s career was definitely in jeopardy. However, thanks to a successful surgery and lots of rehab, Ross has worked his way back to the field at last. 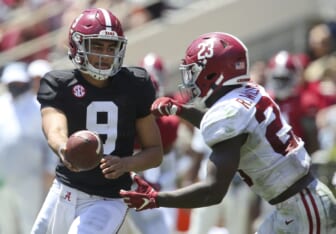 ESPN.com’s Andrea Adelson reported that Ross still has to clear COVID-19 health and safety protocols, so he’ll wait about another week until he officially returns. Nevertheless, Friday marked a huge step toward Ross becoming a go-to playmaker for the Tigers once again.

Considering Clemson lost No. 1 overall draft pick Trevor Lawrence at quarterback, the offense will need all the help it can get. Thankfully for the Tigers, D.J. Uiagalelei looks like a worthy Lawrence successor, and he’ll have the benefit of Ross’ combination of a huge catch radius and explosiveness to attack opposing defenses with.

If he plays to the level he did prior to his injury, Ross could definitely work his way into the first-round conversation in the 2022 NFL Draft.