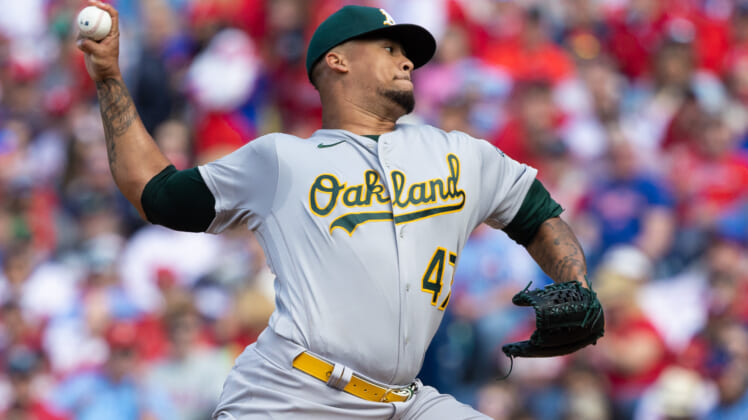 The Chicago White Sox are in desperate need of starting pitching in the aftermath of injuries to Lance Lynn and Lucas Giolito. While Frankie Montas is the ideal solution to Chicago’s issues, the asking price could be a problem.

One of the biggest storylines from the 2022 MLB offseason was the Oakland Athletics teardown. The club is trading off its best players, including pitchers Chris Bassitt, Sean Manaea and All-Star first baseman Matt Olson.

The rebuild is still ongoing after Opening Day with Montas generating interest across the league. However, Oakland is placing a premium value on its ace and that is proving to be an issue for the White Sox at a time of dire need.

According to Bob Nightengale of USA Today, Chicago had multiple conversations in recent months with the Athletics about acquiring Montas. Unfortunately for the White Sox, Oakland wants slugger Andrew Vaughn in exchange.

It’s understandable why the Athletics are setting the bar high for any return. Most MLB teams aren’t looking to trade any starting pitching right now, especially a front-line starter. Montas is on an organization-friendly contract, making him even more valuable.

Chicago reportedly came close to landing Manaea before the San Diego Padres acquired him. It’s left Montas as the only logical solution for a pitching staff that needs a young starter who can eat up innings and can pitch like an ace.

The White Sox also have plenty of reasons to not budge on moving Vaughn. Drafted with the No. 3 pick in the 2019 MLB Draft, the 6-foot-4 slugger is under team control through 2026. While he struggled at times as a rookie, there is still plenty of belief he has an All-Star caliber bat with the ability to hit 30-plus homers in his peak years.

At some point, Chicago will need to revisit its conversations with the Athletics. Lynn isn’t returning until June and Giolito will miss two starts, at minimum, with the abdominal issue. Suddenly, one of the top rotations in MLB lost its best starters and lacks pitching depth.

Many put the White Sox a tier ahead of their AL Central competitors before the season starter. However, Lynn and Giolito’s injuries narrow the gap and that only adds pressure to add more pitching.