The Chicago Cubs have a quietly emerging positional core 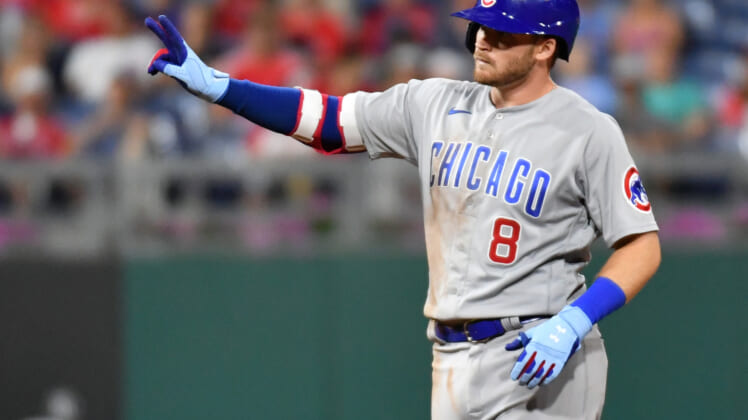 It was just six weeks ago that the Chicago Cubs embarked on a selling spree, as they traded away Javier Baez, Anthony Rizzo, Kris Bryant, Craig Kimbrel, Joc Pederson and Andrew Chafin.

At first, manager David Ross’ new ballclub struggled mightily, low-lighted by a 12-game losing streak. Something funny has happened since that dry spell, though: they’re playing .500 baseball and have won 12 of their last 19.

The impetus for the Cubs’ encouraging play of late and perhaps the road ahead? Their new-look offense.

Chicago Cubs have a promising lineup

Three individuals in particular have flashed potential for the Cubs since the trade deadline and in 2021 on the whole: Patrick Wisdom, Rafael Ortega and Frank Schwindel.

Wisdom has been a power threat all season while holding down the hot corner. Albeit he’ll have to limit the strikeouts moving forward, Wisdom is blasting home runs from the right side. He could be the Cubs’ answer at the corner infield position.

Ortega is doing a plausible job of getting on base by means of contact hitting while also hitting for power. Serving as the team’s everyday center fielder, the left-handed hitter figures to be a permanent part of the outfield rotation.

Schwindel has been a force to be reckoned with at the plate. He’s fielding first base well, flat-out demolishing baseballs and been one of the best hitters in MLB over the last month. The Chicago Cubs may have their Rizzo successor.

Let’s also keep in mind that second baseman Nick Madrigal, who was acquired from the Chicago White Sox for Kimbrel, will be returning to the field next season after hitting .305 as the team’s primary second baseman this season. That’s yet another piece to the puzzle for Ross’ offense.

All the while, David Bote has been a power threat in the past, Nico Hoerner is hitting .313 this season and there are still some productive veterans present. Willson Contreras is one of the best all-around catchers in the sport, serving as a legitimate power threat from the right side. Ian Happ has pop. Jason Heyward is a swift defensive right fielder.

The funny thing about the Cubs’ new positional core is that it’s made up of players who are well into their playing careers from an age standpoint. For instance, Wisdom, Ortega and Schwindel are all between 29-30 years old; Bote is 28; Contreras is 29; Heyward is 32.

There isn’t a physical maturation process needed with this group. It’s a combination of holdovers from the previous core, late bloomers and reclamation projects. Collectively, this unit is manufacturing offense at a reasonable rate.

They entered Wednesday fourth in MLB in home runs (41), ninth in OPS (.756), 10th in batting average (.248) and 15th in runs (119) over the last month. That’s extremely impressive for an offense that in thought moved on from its three best players and four starting position players overall.

The Cubs have taken two out of three games twice from the rival Cincinnati Reds, who are trying to claim the second National League Wild Card seeding, since the trade deadline. They also recently won seven in a row, put up a fight against the World Series-contending White Sox and defeated the Philadelphia Phillies, another NL playoff hopeful, on the road Tuesday night.

This offense is showing it belongs, can’t be overlooked and has the upside to improve down the home stretch and into next season. These games matter for the Cubs. A presumed offensive rebuild is turning into a retooling effort that could lead to an offense that’s nearly, if not as productive as the one that had Baez, Rizzo and Bryant present.

Starting pitching is the Cubs’ weakness at the moment. They dealt Yu Darvish in the offseason. Kyle Hendricks and Zach Davies are having the worst seasons of their respective MLB careers as starting pitchers. Youngsters Adbert Alzolay and Alec Mills have had their moments but overall been shaky this season.

At the same time, this has been Alzolay and Mills’ first crack at being consistent rotation fixtures in the big leagues across a full season. Maybe they take a step forward and become sturdy forces in 2022? It’s also a safe bet that Hendricks, who owns an uncharacteristic 4.54 ERA this season, bounces back.

As the regular season nears the finish line, the Cubs have the chance to continue playing spoiler against teams chasing the playoffs, as seven of their last 10 games are against the bitter rival St. Louis Cardinals.

While the Milwaukee Brewers are the best team in the NL Central, teams like the Reds and Cardinals have the tendency to be volatile from a record standpoint. Meanwhile, the Pittsburgh Pirates are in the midst of a dragging rebuild.

It’s feasible to think that the Cubs can be a .500 team next season with their current offense considering the internal growth taking place across the board, as well as how some of their top prospects should continue climbing the minor-league ranks.

Maybe one of their now-ex-position players makes a return to the Windy City in free agency? The Cubs may not have to pay the price for perhaps waiting too long to begin a rebuild after all.