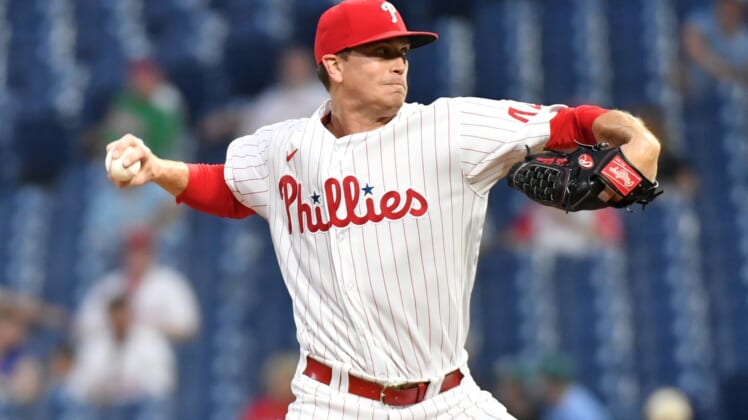 Patrick Wisdom hit a two-run homer and a double to help the Chicago Cubs beat the host Philadelphia Phillies 6-3 on Tuesday.

Alfonso Rivas also homered for the Cubs (66-79), who snapped a three-game losing streak.

Chicago starter Adrian Sampson (1-2) tossed five-plus innings and gave up four hits and two runs with three strikeouts and two walks. He earned his first win with the Cubs.

Rowan Wick recorded his fourth save by striking out the side in the ninth inning.

Odubel Herrera homered and Jean Segura had two hits for the struggling Phillies (72-72).

Philadelphia, which lost for the sixth time in seven games, remained 4 1/2 games behind the first-place Atlanta Braves in the National League East and lost ground in the crowded NL wild-card race.

The Phillies jumped out to a 1-0 lead in the bottom of the first inning when Herrera hit a leadoff homer to right field.

Gibson retired the first 12 Cubs in order before Willson Contreras opened the fifth with a single to right. Wisdom followed with a 447-foot, two-run homer, his 26th long ball of the season, for a 2-1 advantage. Rivas went back-to-back with his first major league home run for a 3-1 lead.

Later in the inning, Rafael Ortega added an RBI double for a 4-1 advantage.

In the bottom of the fifth, Ronald Torreyes reached with one out on an error by Wisdom at third base, and Andrew Knapp was hit by a pitch. Pinch hitter Mickey Moniak struck out and Herrera grounded out to end the inning.

Philadelphia’s Bryce Harper ripped an RBI double in the sixth. Didi Gregorius then contributed an RBI single as Harper barely slid in safely under the tag to cut the deficit to 4-3.

Chicago extended its advantage to 6-3 in the seventh when Frank Schwindel and Ian Happ hit RBI doubles.