There is no doubt the Carolina Panthers would like to upgrade their quarterback situation, however, the 2022 contracts of Jimmy Garoppolo and Baker Mayfield are reportedly the biggest hindrances in swinging a trade for either player.

The latest news in the world of the Panthers centers on their deep dive into the top QB prospects in this month’s NFL draft. Recent rumors have suggested Malik Willis was an early favorite if the franchise decided to take a QB with the sixth pick in the opening round. Other rumblings suggest they are also very much open to the idea of trading down on April 28.

This year’s signal-caller class is not as impressive as years past, which makes it more sensible that the Panthers instead make a move for an established name that might still be available. After Russell Wilson, Deshaun Watson, and Matt Ryan were traded, the most notable name left are Browns QB Baker Mayfield and 49ers veteran Jimmy Garroppolo. Both seem like a good fight for the Panthers but there is a cap-related problem with those moves.

During a guest appearance this week on The Roar: A Carolina Panthers Podcast, Jonathan M. Alexander of The Charlotte Observer explained why adding the contracts of Garoppolo ($24.2 million) and Mayfield ($18.8 million) was impossible when you consider last season’s starter Sam Darnold would ride the pine behind those talents for $18.8 million. 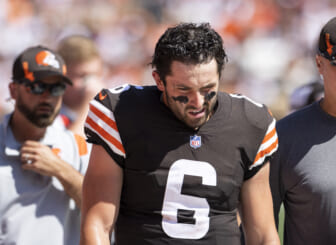 ‘The reason why the Panthers had a disinterest in Baker Mayfield and Jimmy Garoppolo, too, is because their contracts are not something that they would want to take on. And it was something they couldn’t take on, too. And they were focused on Deshaun Watson at the time,” Alexander explained.

While Alexander does actually expect the Carolina Panthers to eventually make a deal for either Garoppolo or Mayfield he explained their current teams would need to agree to pay some of the money left on their contracts or the Panthers would instead wait until they were released before July 1.

“But if that contract comes down, if the 49ers or the Browns agree to take on that money or say the Browns or the 49ers release their quarterbacks, then the 49ers take on $7.5 million in dead money if they did do that,” said Alexander. “That’s why they’ve been opening up that cap space—to give them room so they can possibly trade for a quarterback if that’s what they want to do and I think that’s what they’re gonna end up doing.”

Unfortunately for the Panthers, while Darnold would be an upgrade over most backup quarterbacks, no team would be silly enough to take him and his salary cap anchor in return for their own QB.