There are still many more workouts, conversations, and evaluations to go but if the Carolina Panthers do take a quarterback with the sixth pick in the 2022 NFL Draft, Liberty’s Malik Willis is the early favorite to be their choice.

Several QBs have made moves up draft boards over the last couple of months, as certain NFL team scouts decide if using their first overall pick on a signal-caller would be the right move later this month. Liberty QB Willis has been the leader in the clubhouse for some time, but Pittsburgh’s Kenny Pickett and Mississippi’s Matt Corral have recently seen their stock rise in a big way, and for some teams, either may have usurped the top spot from Willis.

Related: First-round picks for all 32 teams in our 2022 NFL Mock Draft

The Carolina Panthers are a bit of a mess at QB right now. The team traded several picks last year– including this year’s second-round pick — for New York Jets’ former first round-pick Sam Darnold. Unfortunately for the Panthers and head coach Matt Rhule, the USC alum did not improve at all under his watch. This is why they are doing a deep dive on the best possible options in a draft that isn’t overly strong at the QB position.

On Thursday, NFL Network reporter Cameron Wolfe reported that the team plans to have Willis, Pickett, and Corral in for private visits soon. However, he has also heard the team already does have a favorite among the three.

“The priority for them is to evaluate this draft class. See if there’s someone they love enough to go at No. 6, and not like. They have a clear top three I’m told. It’s Liberty’s Malik Willis, Pitts Kenny Picket, and Mississippi’s Matt Corral,” Wolfe said. “And they are planning to have all three in for top 30 private visits to their facility on April 12th.

“They went to all three of their pro days, they’re still doing work, but the name I hear the most buzz out of is Malik Willis,” he continued. “They love his zip, they love the way he has upside and the energy that he exudes. They don’t want to settle at that position. They want to figure out if this is the guy. Rhule said they’re not committed to taking a quarterback at No. 6. I’m told they’re willing to listen to trade-back calls.” 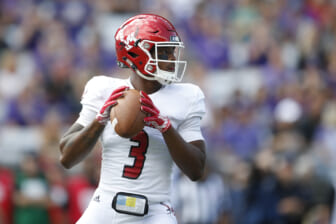 The Panthers have a very difficult decision ahead. The QB class in 2022 is not as good as in years past, and the team has needs in several positions. However, QB is the most important position in the league, and the quicker they can find their next franchise play-caller, the faster they can rebuild the team into a competitive group.

Even if they don’t take a quarterback at six, they still need to do their due diligence and exhaust every possible avenue to see if there is a franchise QB available this year.