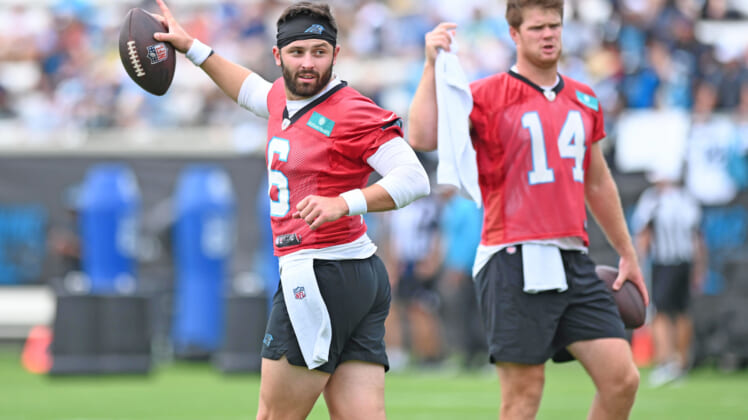 The Carolina Panthers are one of three teams holding a quarterback competition to determine their starter in 2022. It’s clear that the performance they got from their QBs last season under Matt Rhule didn’t cut it. In turn, offensive coordinator Joe Brady was fired mid-season and they’ve since added two new QBs who weren’t on the roster a year ago.

One newcomer is 23-year-old Matt Corral, who was selected in the third round of April’s NFL Draft. While the former Ole Miss standout who once was projected as a possible first-round selection may ultimately be the future at the position in Carolina, he’s not expected to compete for the starting role as a rookie.

Instead we’ll get a heated battle between the first and third overall picks from the 2018 NFL Draft. If this were four years ago, fans would be freaking out, talking about all the potential the Panthers have by picking the two best quarterbacks in the draft class. Only that’s not how Baker Mayfield and Sam Darnold‘s careers have transpired at all, but that doesn’t mean these two don’t still have potential.

Just when do the Panthers plan to make a decision their starting quarterback to begin 2022?

According to head coach Matt Rhule, the Panthers will be ready to announce their starter after Week 2 of the preseason, once they’ve had a chance to break down the tape from their matchup against the New England Patriots on August 19.

Carolina Panthers are in better hands in 2022

Some say when you have two quarterbacks or more, you really don’t have any at all. Basically, the idea is that having two potentially competent QBs causes so much turmoil, not only in the locker room, but also among the fanbase. Everyone has their own opinion, right? So players, coaches, and of course, fans will prefer one option over the other.

At the first sign of struggle, the opposing voices only grow louder, calling for change. Yet, if one player can run away with the competition, that ‘problem’ suddenly disappears.

The Panthers may not have a player who runs away with the starting gig in 2022. Both Darnold and Mayfield have shined at times and also looked ineffective and inaccurate. But Mayfield is 27, and Darnold is 25. Both have fought through injuries, but Mayfield has ten more starts.

Let’s look at more of their career stats side-by-side.

These numbers would suggest Mayfield has the edge. Which, think about it, Darnold was on the team last year and wasn’t good enough. The team has since added two other quarterbacks with a high ceiling to the roster, which isn’t a strong showing of faith that Darnold will be the solution.

Yet by all appearances, this is a true competition. We’ll see who can start pulling ahead, but Mayfield certainly has the bigger chip on his shoulder and likely a stronger desire to prove the haters wrong. Darnold’s already on his second, possibly third chance, Mayfield’s just starting his second opportunity. Let’s see what he can do with it.

Related: What the future could hold for Baker Mayfield with the Carolina Panthers