The New England Patriots stunned just about everyone in the NFL when they released starting quarterback Cam Newton, opting to roll with a rookie under center in Mac Jones.

Newton posted a video on Friday featuring an extensive conversation in which he expressed his surprise at being cut, and explained why his departure from New England was for the best based on the direction the team was going.

The following quote, as captured by theScore, encapsulates the biggest takeaway from Newton’s video:

It makes sense that someone of Newton’s status, a former league MVP with obvious charisma and an alpha presence, would cause a distraction if he were to stay on as Jones’ backup.

But in the first place, Newton didn’t expect for Jones to beat him out for the starting gig — and strongly implied that the Alabama product, in fact, didn’t get the nod by pure merit. In any event, it was a shock to the system when coach Bill Belichick called Newton in to have a talk that led to his exit.

“Did it catch me by surprise being released? Absolutely,” Newton said.

The COVID-19 testing mishap Newton experienced did him no favors, and he described the complicated situation that played out behind the scenes, per NFL.com’s Kevin Patra:

Newton acknowledged that Jones is “good enough” to help the Patriots win games in 2021, but believes he could’ve done the same.

The thing is, their skill sets are so different, and Jones is more in the mold of the pure pocket passer the Patriots build their two-decade dynasty around with Tom Brady. Newton brings a unique rushing element to the gridiron, but New England clearly preferred Jones’ style of play. 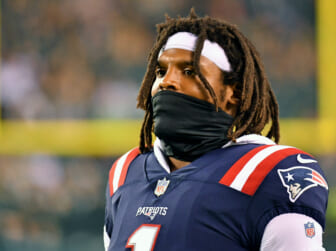 The reason Newton found himself in the COVID-19 health and safety protocols in the first place was largely due to his unvaccinated status. That’s going to be a deal-breaker in the first place for many teams to sign him, simply because of how the NFL’s policies on that front heavily incentivize players to get vaccinated.

If he gets the shots in the arm, Newton may increase his chances of signing somewhere, and potentially getting some spot starting duty in the event of a QB injury or COVID-induced absence. However, as things stand right now, the game of QB musical chairs has stopped, and Newton doesn’t really have a viable landing spot.

Like he admitted himself, any team that signs Newton to be a backup would inevitably bring about a big distraction to the locker room. If their current starter were to struggle, there would be a lot of pressure to pivot to Newton for a spark.

It’s going to be a long, 17-game season of waiting for Newton, but sitting out may be necessary for him to get a fresh crack as a potential starter in 2022. Then again, maybe ingratiating himself as a backup somewhere could boost his stock.

The one thing Newton will have working in his favor no matter what he does this season is that he’ll be a bargain pickup next offseason in free agency. Some team is bound to take a flier on Newton because of that.