The Tampa Bay Buccaneers starting quarterback is on after Tom Brady retired. While blockbuster trades for Deshaun Watson or Russell Wilson could be options, Jameis Winston is reportedly not under consideration.

Drafted by Tampa Bay with the No. 1 pick in the 2015 NFL Draft, Winston still has a few connections to the organization. However, he only spent one season as the Buccaneers’ starting quarterback with head coach Bruce Arians running the show.

While some have speculated that the 28-year-old quarterback could return to Tampa Bay in 2022, one of the team’s top beat writers threw cold water on the idea during a recent interview. 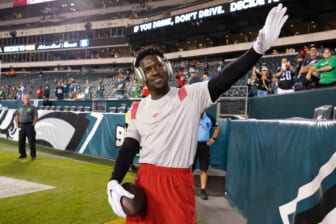 During an interview on The Rich Eisen Show, Buccaneers’ reporter Rick Stroud dove into how Tampa Bay views a possible Tom Brady return and offered insight into a potential reunion with Winston.

While Stroud doesn’t believe either will play for the Buccaneers in 2022, his reasoning on Winston hints the decision is related to Arians.

“I don’t think Bruce Arians is fine with it. Been there, done that. There was a time when they were 7-7 in his one year here under Bruce. I thought he was going to make it, he threw for like 460-something two games in a row. Then they played Houston…then they played Atlanta and he threw both those games away. I saw on Bruce’s face that day he had reached his limit with Jameis Winston.”

A divide between Arians and Winston shouldn’t come as a huge surprise. Winston threw a league-high 30 interceptions during the 2019 season, racking up pick-sixes at a historic rate. Late in the year, Arians took repeated shots at his starting quarterback.

While the head coach might not want to see the former No.1 pick returning to Tampa Bay, it seems that sentiment isn’t shared by prominent members of the Buccaneers’ coaching staff.

“I will tell you this. There are two coaches there that would have him tomorrow. One is Byron Leftwich, who wished he had more than eight months with him. The other one is Clyde Christensen, his quarterbacks coach. Both those guys, I think would be fine with Jameis.”

Winston seemed to display better decision-making in 2021, demonstrating that his time with Sean Payton and Drew Brees made him a better quarterback. However, the Buccaneers seem to prefer starting Blaine Gabbert over bringing the Winston experience back to Florida.