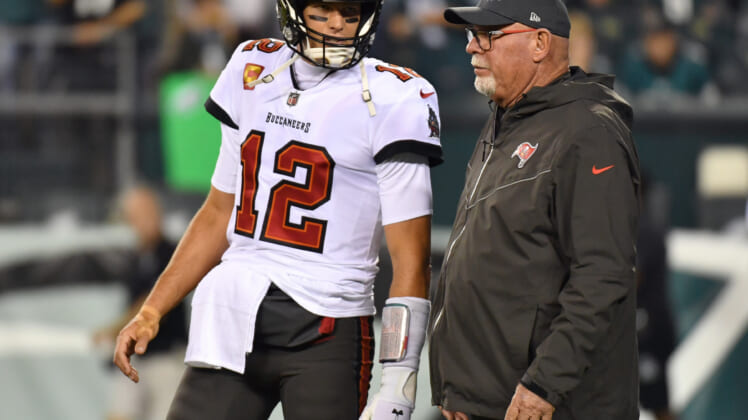 Tampa Bay Buccaneers head coach Bruce Arians does not agree with reports of a schism between him and former franchise quarterback Tom Brady last season.

On Friday, FOX Sports analyst Rich Ohrnberger tweeted that offensive coordinator Byron Leftwich and now-retired QB Brady sometimes felt “undermined” by the head coach as he would “take the red pen to work they’d done” to the week’s game plan that they had devised together.

The report added new layers to the seven-time Super Bowl champion retirement earlier this month. A decision that surprised many, since the 44-year-old legend was still playing at an elite level despite his advanced age. Now it seems that Brady’s choice may have been driven more than just a desire to spend more time with his family.

However, in a Saturday interview with the Tampa Bay Times, the 70-year-old coach refuted the claims made by Ohrnberger. Telling the news outlet it was utter “bullsh*t” and “far fetched.”

“It seems like there’s one [story] every day now. Everybody is speculating he’s going somewhere else. That don’t bother me,” Arians explained. “This other bullsh*t, the relationship thing, that’s so far-fetched.’

“I mean, that’s such bullsh*t. That’s what pisses me off. I guess probably Byron could corroborate this, too.’’

The Super Bowl-winning coach admitted he would make some changes to the offensive game plans that Brady and Leftwich devised. However, he says he would not outright scrap it, and that the process was a collaborative effort between all three men. A process he calls one of the best he’s ever been a part of.

“I will go over the game plans and add things, but I don’t delete anything. I don’t have to because they do such a good job,” said Arians … “I’ll see some things. Add some things. It’s an awesome collaboration, one of the best I’ve ever been around.”

The situation has unfortunately turned into an episode of he-said and he-said. However, Ohrnberger’s reputation as a news source took a hit on the same day as the Brady news when he reported a story about Kansas City Chiefs superstar Patrick Mahomes barring his fiancee and brother from future games. A story Mahomes quickly denied on social media.