Boston, in need of a spark with a 4-6 record Monday and far down the NBA standings, has run into plenty of issues this season. The Marcus Smart contract extension is not paying off immediately and the team already held a players-only meeting.

With the franchise in need of a spark, first-year president of basketball operations Brad Stevens is already exploring the trade market for potential solutions. While there are limited options available this early in the 2021-’22 NBA season, it seems Boston is at least intrigued by the 76ers’ disgruntled point guard. 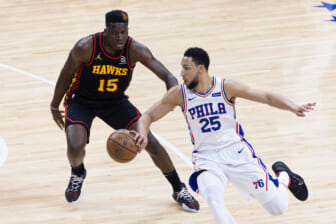 According to The Athletic’s Shams Charania, the Celtics have engaged in conservation with the 76ers about a Simmons trade, with a legitimate interest in acquiring the All-Star point guard. While Boston hasn’t found any traction, like every other NBA team, it can offer an All-Star to Philadelphia.

“Talks have been fluid with no traction as of yet, those sources say. Any potential Simmons deal with the Celtics would have to include All-Star forward Jaylen Brown.”

Jaylen Brown, who earned his first All-Star selection this past season, would provide a young cornerstone player. that 76ers’ president Daryl Morey likely wants. With the Portland Trail Blazers keeping Damian Lillard, there’s even less incentive for Boston to include Brown in a potential trade.

But even amid the increasing drama between the 76ers and Simmons, it seems a trade is still weeks away.

After avoiding the team all summer, Simmons reported to training camp with only a few days remaining in the 76ers’ training camp. But any hopes for a resolution between the two sides didn’t last long.

Shortly after Doc Rivers said the 6-foot-11 guard wasn’t in ‘game shape’, Simmons was suspended by the team for detrimental conduct during practice. A short time later, ht informed management that he wasn’t ‘mentally ready to play’ in an NBA game.

The 76ers allowed Simmons to seek outside treatment with doctors he trusted to provide mental health assistance. But the team’s patience with the All-NBA defender is fading. Philadelphia is frustrated with the lack of details it’s being provided on Simmons’ treatment, per The Athletic, citing a need to better understand what he needs.

But with Simmons not required to disclose that information and his doctors allowed to protect his private information, the 76ers have resumed fining Simmons.

With Morey sticking to his high asking price and no team willing to cave to that demand, Simmons and the 76ers will likely be stuck with each other through November.