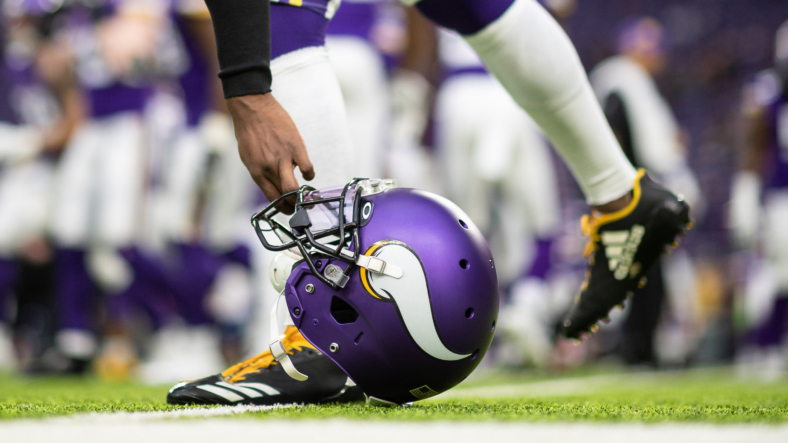 Everyone wants to feel optimistic when starting a new season from scratch. That certainly includes the Minnesota Vikings, who are looking to return to the playoffs as Kevin O’Connell takes over where Mike Zimmer left off. Clearly, the Vikings hope to improve upon their 8-9 record from a season ago.

But, what if they don’t? Are there some areas Vikings fans should be concerned about heading into 2022? Just like there are strengths, there are plenty of weaknesses in the Land of 10,000 Lakes. Down below, we highlight four of the team’s biggest concerns before the regular season gets underway.

The Vikings brass wants to believe they made the perfect hires this offseason by adding Kwesi Adofo-Mensah and coach O’Connell. Yet, for every Sean McVay, there’s an Urban Meyer. We’re not saying O’Connell will approach the impressive levels of incompetence Meyer displayed with the Jacksonville Jaguars, but it is important to realize that this is his first time being a head coach and the first time calling plays as the team’s leader.

It wouldn’t be shocking for O’Connell to experience early growing pains while he tries to balance getting enough touches to all the team’s stars. There’s only one football, and Justin Jefferson should be receiving ten targets per game. Dalvin Cook should be getting 25+ touches as well. Yet, there’s also Adam Thielen, K.J. Osborn, and Irv Smith Jr. While most of the passing distribution falls on the shoulders of Captain Kirk Cousins, O’Connell will have to have a strong gameplan that doesn’t put the team in third-and-long situations. Is he ready to go toe-to-toe against Matt LaFleur in Green Bay?

Aside from maybe some early playcalling hiccups, it’s hard to envision the Vikings struggling on offense. The lone area on the offense that anyone has concerns about is the same weakness that’s held the team back for years now. Garrett Bradbury hasn’t been able to hold his anchor in the middle, and he’s not suddenly coming into the 2022 season as a changed man.

Unlike in seasons past, the Vikings actually have a few backup options ready to step in should Bradbury continue to come up short. Austin Schlottmann and Chris Reed both have extensive experience snapping the ball and will continue to push Bradbury to be the best he can be simply by showing they’re capable in practice.

Many aren’t convinced that the new scheme can help hide Bradbury’s flaws, but coach KO doesn’t seem to think it’s an issue yet. We’ll see if his feelings are the same after going against Fletcher Cox in Week 2.

When the Vikings made the last-minute decision to cut projected starter Armon Watts from the roster, it left many in shock. A trade for former second-round pick Ross Blalock was announced shortly after, but it still didn’t make much sense to cut Watts. It leaves the Vikings without much experience among the backups in the defensive trenches.

Between veteran Jonathan Bullard and rookie former Gopher Esezi Otomewo, James Lynch may have the most potential. Just 23, the 2020 fourth-round pick has only played 22 games in his career, which has equated to just 364 defensive snaps. But Lynch has shown a motor at defensive tackle that reminds some fans of Chris Hovan (the tats probably help). Lynch has tallied two sacks and three tackles for loss in that brief amount of time.

Basically, if any of the team’s three projected starters go down, the Vikings will be turning to either two inexperienced and unproven bodies, or Bullard, who’s on his fifth NFL team in as many seasons. It just might be the area with the least amount of depth on the roster heading into 2022.

The biggest concern for many keeping a close watch on the Vikings heading into the offseason was how the new regime planned to overhaul the secondary. It’s a unit that had completely fallen apart the last few seasons under Mike Zimmer. But the DB room looks entirely different this season.

Sure, Patrick Peterson, Harrison Smith, Cameron Dantzler, and Cam Bynum all return, but the team will also be asking a lot out of rookie Andrew Booth Jr. and free agent signee Chandon Sullivan. The latter has quietly proven himself to be a strong option covering slot receivers, but he’s still an unknown to many around the NFL.

Plus, Peterson and Harry the Hitman are both on the wrong side of 30. Is this the season we see either one take a major step back due to diminished abilities? It’s always a possibility. We still don’t know if Dantzler can become one of the best corners in football or possibly not good enough to hold down his starting role. There’s a reason why the team selected a defensive back with each of their first two selections.

Unless a few of the group consisting of Lewis Cine, Booth, Dantzler, and Bynum prove they’re at least above average, we could be looking at another long season of Vikings defensive backs getting torched by Aaron Rodgers.