The reigning Super Bowl champion Tampa Bay Buccaneers will kick off their NFL preseason in Week 1 at home against the Cincinnati Bengals. Even in an exhibition tilt, this figures to be a lopsided matchup in the Bucs’ favor. Continue reading for our full game preview and key battles to watch for on Saturday.

Bengals vs Buccaneers: What you need to know

The word coming from Tampa Bay’s training camp is that the offense has had some growing pains. That means we could see 44-year-old Tom Brady suit up for “a drive or two” according to Bucs head coach Bruce Arians.

Even in the relatively low-stakes preseason atmosphere, it’d behoove the Bengals to get some reps against the GOAT and the loaded Bucs offense. That means star free safety Jessie Bates III will be counted on to match wits with Brady as he tries to beat Cincinnati’s coverage with downfield passes.

How far will the Bucs go in defending their Super Bowl title? Click here for our NFL playoff predictions

Bates and the secondary are pretty strong for the Bengals, but their front seven leaves a lot to be desired. They signed defensive end Trey Hendrickson in free agency, and rewarded Sam Hubbard with a contract extension. Hendrickson was an especially dubious move, and Hubbard has little upside as a pass-rusher.

The Bucs are returning all five of their offensive line starters from their Super Bowl run. That continuity should serve them well, and if the Bengals are taking away deep throws from Brady, Cincinnati’s inexperienced, no-name linebacker corps will have a world of problems trying to guard any of Tampa Bay’s weapons in space.

It’s going to be an uphill battle for Zac Taylor in this one, as his counterpart Arians clearly has the edge in experience and roster talent. Making matters tougher is the fact that Bengals quarterback Joe Burrow won’t play, as he continues to be brought along from a major knee injury.

Where do the Buccaneers fall in our NFL defense rankings? Click here to see how highly regarded they are

What’s crazy about the Bucs is that they retained every key player — not just their entire o-line, everyone! (cue the Gary Oldman clip from Leon: The Professional) — from their Super Bowl LV triumph over the Kansas City Chiefs. They have plenty of young talent in the pipeline, too, so it’s not like they’re fielding a top-heavy roster that lacks depth.

Meanwhile, Cincinnati really has its work cut out to contend any time soon. The other three teams in the Bengals’ AFC North division made the playoffs last season, and Cincy made only marginal improvements after posting a 4-11-1 record. 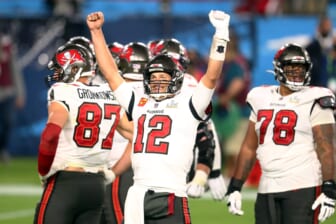 The bottom line: With a 4-0 edge in our head-to-head subsections, is it really a surprise that the Bucs are our pick to cover that big spread? Maybe Cincinnati will be inspired to stick it to the reigning champs, but more likely, any time its offense is on the field without Burrow leading the way, it’s not going to be pretty.