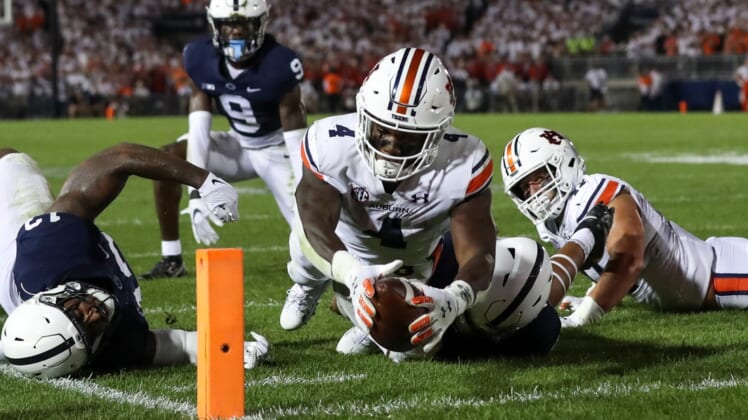 The No. 23 Auburn Tigers look to rebound from their loss to No. 6 Penn State when they entertain the Georgia State Panthers Saturday in Jordan-Hare Stadium in Auburn, Ala.

The Tigers drove deep into Penn State territory twice late in the fourth quarter but came away empty each time in a 28-20 loss.

“As far as the pass rush goes, yeah, we’ve got to put some pressure on the QB,” Harsin said. “We can’t let him stand back there and sit in the pocket for 8-9 seconds. We’ve got to be able to move him and get him off his platform of where he wants to be.”

Georgia State (1-2) lost to Army and then-No. 24 North Carolina before getting their first win, 20-9 over Charlotte, last Saturday.

Two of quarterback Darren Grainger’s six completions went for touchdowns, and three running backs and Grainger combined for 282 yards. They were led by Destin Coates, who gained 83 yards on four carries, including a 64-yard run.

Georgia State coach Shawn Elliott, who guided the Panthers to a win at Tennessee in 2019, knows yards will be harder to come by Saturday.

“They are big, physical, talented,” Elliott said of the Tigers. “They’ve got the pick of the litter because they are Auburn. They are athletic. That is who they are and what they are about. If you look at their interior defensive line, they’ve got some mammoth men in there.”

Elliott said Grainger, a transfer from Furman who replaced Cornelious Brown late in the loss to North Carolina, is in line to make his second straight start.
Jamari Thrash leads Panther receivers with 11 catches for 167 yards and a touchdown.

“These guys have done a great job as far as just what they have to do on the offensive side, and they’ll give you some different looks and ways they can attack you,” Harsin said of the Panthers.

Now the Panthers take a step up in class, but Elliott doesn’t expect them to be intimidated as they travel to Auburn for the first time.