It’s not really in question. Andrew Wiggins was the Golden State Warriors’ second-most valuable player during their run to the NBA title this past season behind Stephen Curry.

In helping Golden State hoist the Larry O’Brien for the fourth time in eight years, the former No. 1 pick played elite-level defense, chipped in from a scoring standpoint and hit the boards at a clip we’ve never seen from him before.

Wiggins’ ability to guard the likes of Luka Doncic and Jason Tatum in the final two rounds added even more to the idea that he’s important to the Warriors’ success moving forward.

Interestingly enough, it was just a few weeks ago that reports came out of the Bay Area suggesting Golden State may be forced to trade Wiggins due to the finances of boasting the largest payroll in NBA history. After his Finals performance, this apparently isn’t in the cards anymore.

According to Connor Letourneau of the San Francisco Chronicle, Wiggins and the Warriors are set to discuss what will be a massive contract extension this summer. Said deal could reach max levels, adding to their historic payroll in the process.

Wiggins signed this deal with the Minnesota Timberwolves back in October of 2017. When Golden State traded for him in February of 2020, said deal was seen as an albatross. It forced Minnesota to sweeten the pot with draft picks in a deal that brought the team D’Angelo Russell. Fast forward a little more than two years, and Wiggins could be looking at a hefty raise. 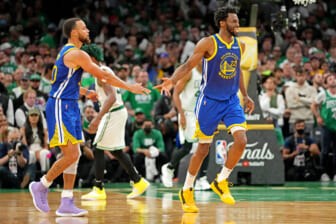 What will an Andrew Wiggins contract extension look like?

For Golden State, this would be a more expensive proposition. Right now, they have the highest luxury tax bill in Association history. In short, that $146.4 million would cost the team over $280 million when taking into account said bill. On the court, Wiggins has more than proven he’s worth the initial sum on this deal.

The larger question at hand are finances. Golden State also has to think about signing stud young guard Jordan Poole to an extension this summer before he hits restricted free agency in 2023. Warriors general manager Bob Myers clearly indicated during the playoffs that said extension is on the table.

Any Poole max extension would come in at $190 million over five years. It’s similar to what fellow 2019 classmates Zion Williamson and Ja Morant are set to earn on extensions this summer. Whether Poole is worth that money remains to be seen. But Golden State views him as an important part of the future.

The other point we have to make when determining whether an Andrew Wiggins contract extension is in the cards is the presence of 19-year-old forward Jonathan Kuminga. He showed out big time in inconsistent playing time as a rookie. Can Golden State find a way to get him more playing time while retaining Wiggins long-term? It’s an open question.

Either way, the Warriors’ free-spending ways promises to continue this summer — much to the chagrin of rival NBA teams.