As part of the NFL’s new television deals, worth more than $100 billion, the league sold the future broadcasting rights to its Thursday primetime games. FOX, which currently holds primary rights to the matchups, will stop broadcasting TNF games after the 2021 season.

The NFL first renewed its deal with Amazon in April 2020, expanding the company’s slate of games to 11 through 2022. When it became clear FOX and other cable networks weren’t as interested in TNF, which typically draws the lowest ratings of the NFL primetime games, Amazon stepped in.

Jeff Bezos, who has been interested in buying an NFL team, is now looking to add a legendary voice to the new broadcast booth. According to Andrew Marchand of the New York Post, Amazon is pursuing Al Michaels to become its play-by-play man.

The company also has interest in landing FOX’s Joe Buck, who has plenty of experience with TNF, along with CBS’ Ian Eagle. However, Michaels is the top priority. 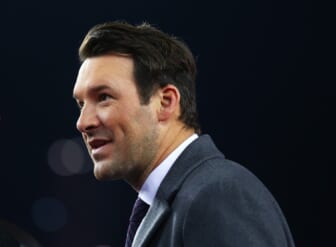 NBC is reportedly involved in the negotiations with Michaels and his potential next employer. According to Marchand, NBC’s top production team for its NFL broadcasts could assist with Amazon’s future broadcasts.

This isn’t the first time Michaels has been pursued for another play-by-play gig. ESPN proposed a trade for the legendary broadcaster, hoping he could join the Monday Night Football booth. NBC ultimately declined, but the network seems very receptive to shaking things up in 2022.

One key element that will decide what route Amazon takes is Michaels’ salary. He will not receive a 10-year contract, given that would keep him calling games into his 80s, but he might want to become the highest-paid broadcaster in sports. Romo currently holds that title at $18 million per season, but it’s a figure Amazon might be willing to shatter.

While FOX is losing Thursday Night Football, it will hold exclusive broadcasting rights for the United States Football League’s 2022 relaunch.