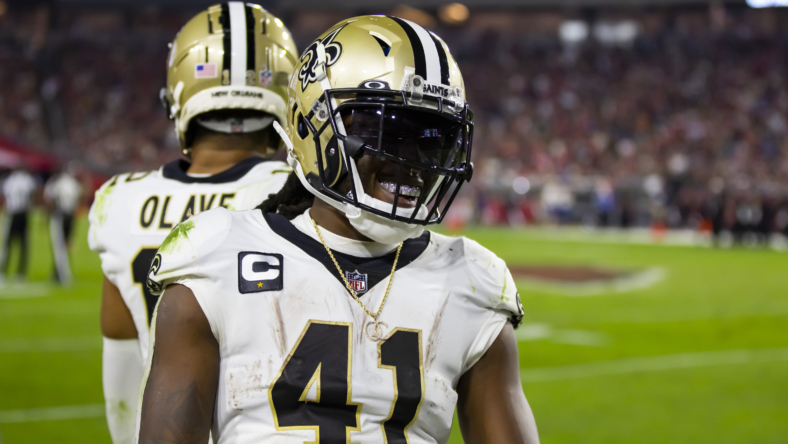 The New Orleans Saints are further down in the NFL standings than they expected to be heading into November. Facing an uphill battle to make the playoffs, running back Alvin Kamara is now being floated in NFL trade rumors.

In advance of the Nov. 1 trade deadline, running backs are among the most abundant position available. Even after the Christian McCaffrey trade, the likes of Kareem Hunt, Jeff Wilson Jr., Cam Akers, D’Ernest Johnson and David Montgomery are all reportedly available at the right price.

Kamara is the player most teams want, identifying the two-time All-Pro selection as the perfect piece that helps create an elite NFL offense. While he isn’t replicating the numbers seen in previous seasons, the remains one of the best all-purpose backs in the NFL.

With the possibility of a suspension in 2022 for his Las Vegas arrest off the table, contenders are more than willing to acquire Kamara for immediate help.

According to Tom Pelissero and Ian Rapoport of NFL Network, the Saints are receptive to inquiries on their best offensive player. While trading Kamara would leave New Orleans with a $14.732 million cap hit next season, the franchise is willing to absorb it if the right offer is made.

Will the Saints trade Alvin Kamara

The asking price will likely be what prevents a blockbuster deal by Nov. 1. Entering the weekend, general manager Mickey Loomis reportedly wanted a return that at minimum matched what the Carolina Panthers received for McCaffrey (second- third- and fourth-round picks in 2023 and a fifth-round pick in 2024).

Considering the money still owed to Kamara and the likelihood of a suspension next season, it’s a price NFL teams are unlikely to meet. Although, it’s possible New Orleans becomes more receptive to selling and lowers the list price for Kamara if it drops to 2-6 with a loss to the Las Vegas Raiders on Sunday.

For now, Kamara is expected to remain in New Orleans past Nov. 1 and his teammates will also likely still be on the roster after the trade deadline. Even if the Saints aren’t a playoff contender, they have more than enough incentive to keep competing because the Philadelphia Eagles own New Orleans’ 2023 first-round pick.