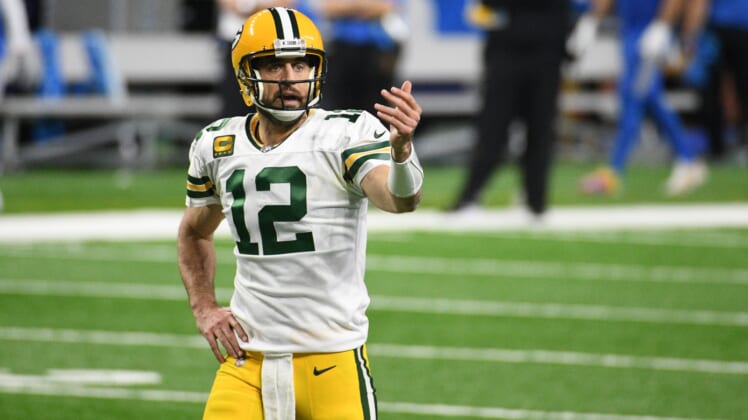 Aaron Rodgers cast doubt on his future with the Green Bay Packers after another NFC Championship Game loss. It immediately sparked trade rumors, launching a new offseason of speculation for the future Hall of Fame quarterback’s time in Green Bay. Now, things have taken another turn.

Following Rodgers’ comments, head coach Matt LaFleur made it emphatically clear that he wants the franchise quarterback to return for the 2021 season. However, not everyone in Green Bay seems to share that sentiment. As a result, in an offseason where multiple star quarterbacks could be moved, there was more uncertainty around Rodgers’ future.

Following days of speculation, a new report sheds more light on the direction this situation could be headed.

According to Sports Illustrated’s Albert Breer, an Aaron Rodgers trade is unlikely to happen this offseason. Instead, one of the NFL’s top insiders believes Rodgers used his press conference after the NFCCG loss to deliver a message to the organization before it started preparation for the offseason.

It’s reasonable to think Rodgers was trying to make a point to the Packers. As he watched Tom Brady celebrate another conference title, it was impossible to ignore how the Tampa Bay Buccaneers took an aggressive approach to free agency and the NFL Draft after signing Brady.

The Buffalo Bills and Kansas City Chiefs took the same approach. Buffalo pulled off a trade for Stefon Diggs, which launched Josh Allen’s breakout season. Meanwhile, the Chiefs drafted Clyde Edwards-Helaire and have spent significant money building one of the NFL’s most talent-rich rosters.

Compare that to the Packers. In the 2020 offseason, Green Bay spent little effort in improving its roster for the season. Free-agent addition Christian Kirksey barely contributed and receiver Devin Funchess, who attracted little attention in free agency, opted out due to COVID-19. Most notably, the Packers drafted quarterback Jordan Love in the 2020 NFL Draft.

After trading up in the first round for Love, despite no other teams trying to jump them, rumors suggested the Packers drafted Love to spite Rodgers.

While it might have served as fuel for Rodgers’ NFL MVP season, the holes not addressed by the front office cost this team in the NFC Championship Game.

The Packers have already started making new changes this offseason, firing their special teams coach and parting ways with defensive coordinator Mike Pettine. If they want to convince Rodgers that this franchise is committed to competing for a Super Bowl in 2021, though, bigger moves are required.