When it comes to being in touch with oneself and understanding that working on that is key to cultivating a great culture at the workplace, it seems like MVP quarterback Aaron Rodgers is playing 3-D chess while the Green Bay Packers chuck checkers at team headquarters.

Rodgers was speaking ahead of his exhibition golf showdown, The Match, in a rare public media engagement on Monday. He was surprisingly candid about what he’s done while avoiding the Packers’ practice field during organized team activities and minicamp, per ESPN.com’s Ben Baby:

“I’m very thankful for the opportunity to work on my mental health. […] I’ve just really been trying to think about what puts me in the best frame of mind. What habits can I form that allow me to feel most in my body, most present, happiest? […] Taking time to work on yourself is, I think, the best gift any of us can give ourselves.”

Now, anyone who’s breaking this down is obviously doing so from afar, but by now, it’s pretty easy to tell when professional athletes are being genuine and when they’re just dropping a cliche line to the media.

Tom Brady recently spoke about how he doesn’t say what he’s actually thinking to reporters 90% of the time. This mental health commentary by Rodgers wasn’t one of those instances.

It’s pretty plain to see what Rodgers is searching for from the Packers: Respect.

Green Bay’s front office disrespected Rodgers by trading up to draft Jordan Love in 2020 without giving him advance notice. He proceeded to bury Love on the depth chart and win MVP honors last season.

Rumors are buzzing that Rodgers wants out, and why wouldn’t he? Instead of making a fuss about it to the media, or degrading the Packers in front of the world when he speaks publicly, Rodgers is just focused on what he can control.

Instead of getting into a frustration-fueled confrontation, or resorting to some of his passive-aggressive tendencies of the past, it seems like Rodgers is genuinely focusing on putting himself in the best frame of mind and letting the chips fall where they may.

You might be saying: Well, he has the control to reach out an olive branch to Green Bay and repair the divide between himself and the front office.

That’s true, yet when CEO Mark Murphy comes out, essentially throws his hands up, says Rodgers is a “complicated fella” and doesn’t make even a modicum of effort to repair the relationship, why should Rodgers even bother?

The way to put everyone in the best frame of mind in team sports is to unite toward a common goal, which in the NFL, should be to win a Super Bowl. For whatever reason, ever since the days of Brett Favre, Green Bay seems content to only modestly invest in the present to ensure its future is secure. 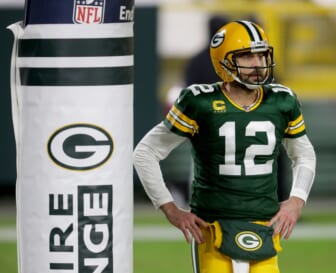 You know what that gets you? Only one Super Bowl with Favre, and so far, one with Rodgers. That neither have won multiple championships to this point is inexcusable, and it’s not their fault. They’re not blameless, but more blame falls on the perpetually conservative front office.

While Packers players give it their all on the field, trying their best to band together and win a Super Bowl, it’s obvious that they’ve lacked enough talent to consistently be in the Lombardi Trophy conversation. Rodgers has to will them to a deep playoff run every time. That hasn’t been enough, and it wasn’t during Favre’s tenure either.

The aim here isn’t to psychoanalyze Murphy and general manager Brian Gutekunst from afar. It’s quite an obvious diagnosis, though: They don’t have an inkling of a pulse on how to deftly handle the Rodgers situation, and it’s going to cost them if they don’t change their mentality very soon.

Self-awareness and self-acceptance breed kindness, compassion and empathy for others, and build camaraderie. The individual is more open to give and receive. Sounds like something you’d want a star quarterback to subscribe to.

Maybe instead of just writing Rodgers off as a hopeless case who thinks too much like a 21st-century human, the Packers’ brass could get off their high horses.

If Green Bay’s leadership humbled themselves, and worked on themselves, they’d realize they’re on the precipice of blowing yet another golden opportunity at a Super Bowl for a future that, if precedent holds, won’t be as bright as everyone hopes.

Getting Favre and Rodgers back-to-back at the most important position in sports is winning the lottery. But guess what’s painfully obvious? The Packers have been too busy patting themselves on the back for acquiring those two legendary QBs, and haven’t achieved their full potential because of it.

Rodgers doesn’t need to say anything else. What the Packers have done for decades speaks louder than anything to justify Rodgers’ wish to be traded. Because they lack the self-awareness to see the errors of their rigid ways.