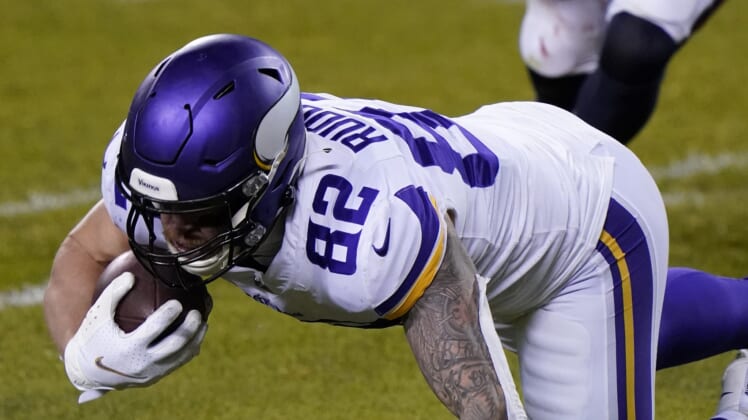 With the not-so-surprising news that the Minnesota Vikings and Kyle Rudolph have parted ways, he can immediately sign with a new team. The two-time Pro Bowl tight end should have plenty of interested suitors. We take a look at a few of them.

As a player who can catch and block with the best of them, Kyle Rudolph is pretty much everything you can ask for at the tight end position. His hands are incredible. That has not changed. In fact, he’s only one year removed from posting the highest catch rate of his career, hauling in 81.3% of his targets.

The bigger concern for interested teams is his age. Rudolph will be 32 heading into his 11th NFL season, and with that his athletic abilities are declining. Though he was never speedy by any means to begin with, so it’s possible Rudolph won’t lose much as he ages.

During his past two seasons with the Vikings, Rudolph’s targets drastically declined, averaging just over 42 targets per year. However, that may simply be the product of a run-heavy approach combined with an uber-talented wide receiver group in Stefon Diggs/Justin Jefferson and Adam Thielen.

Wherever Rudolph chooses to sign, look for him to try to lock in a role where he is more involved with the offense, receiving more opportunities in the passing game as opposed to blocking all the time. With his 6-foot-6 frame, Rudolph the Red Zone Reindeer should still be a great target for QBs when it’s time to score.

Ever since Rob Gronkowski retired after 2018, the New England Patriots have not had anything resembling a good tight end. Adding the reliable Kyle Rudolph would quickly change that. A disciplined player, having committed just one penalty all of last year and only losing one fumble in his entire career, Rudolph would fit in nicely with what Bill Belichick preaches.

Boasting over $60 million in cap space, the Patriots can afford to pay Rudolph a reasonable amount should they want to add him. As bad as the receiving corps was in 2020 for Cam Newton and other Patriots quarterbacks, signing Rudolph could be the start of a new group of pass-catchers looking to improve upon last season’s shortcomings.

Kyle Rudolph graduated from Notre Dame and was born in Cincinnati so it wouldn’t surprise anyone to see him return home to play with a budding superstar quarterback in Joe Burrow. While the Bengals are not on the top of anyone’s list to reach Super Bowl LVI, they could become viable contenders quickly with a few of the right moves. Acquiring a veteran like Rudolph, who is a great locker room presence, could go a long way toward building a winning atmosphere for years to come.

With over $40 million in cap space available, fitting Rudolph under the bill will be no issue at all. From his days as a Viking, Rudolph proved his ability to hold down his own as a blocker. As the Bengals work to protect their franchise quarterback, a sturdy pass protector such as Rudolph could prove to be Burrow’s best friend in no time.

It’s no secret that anyone who has played with Teddy Bridgewater from his days as a Minnesota Viking is a big fan of the quarterback. You can count Kyle Rudolph among that group. It’s not hard to envision a scenario where he heads to the Carolina Panthers for a chance to be their starting tight end and to possibly play with his old pal. Even if the Panthers may ultimately replace Teddy B.

Currently sitting with over $35 million available to spend, the Panthers can afford to go on a spending spree. But adding Rudolph shouldn’t cost more than $5 million per season. Some mock drafts have the Panthers targeting a player such as Florida star tight end Kyle Pitts with their first-round pick, but signing a proven player like Rudolph could allow them to target other needs.

Tennessee Titans sleeper choice for Rudolph thanks to Todd Downing

Talented Tennesee Titans tight end Jonnu Smith is set for free agency and they may very well try and retain him. With that said, they are limited from an NFL salary cap perspective. During the past few seasons, the Vikings and Titans have shared many similarities in their offensive styles. Both teams operate a run-heavy offense that works off play-action and explosive plays from their outside receivers while relying on good tight ends that can both block and catch.

This is where Kyle Rudolph could be a perfect fit. On top of possibly being used in a similar role, Titans offensive coordinator Todd Downing is familiar with Rudolph from when he was the Vikings’ tight ends coach in 2018. In that season, Rudolph caught 64-of-82 targets for 634 yards and four touchdowns. Signing with the Titans could give the former Viking the best chance to get back to the playoffs right away.