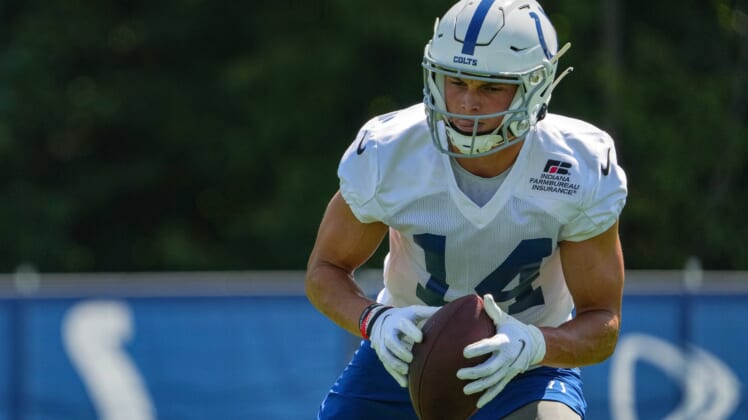 The Indianapolis Colts have an alpha wide receiver in Michael Pittman Jr, and that’s about it. That’s an oversimplification as the team is high on the rest of its receivers and tight ends. The biggest need for the offense for this upcoming season is a consistent, reliable second receiver. The hope is that there will be one guy who fills this role. A possible reality is that for a good chunk of the season, the consistent, reliable second receiver could be a different player each week.

In looking at the roster, it is not difficult to see that there are several possible options. Does Mo Alie-Cox finally shed his project label and ascend to the heights that GM Chris Ballard and head coach Frank Reich envision?

Does second-year tight end Kylen Granson take a big step forward? Can Parris Campbell finally stay healthy for a full season or at least longer than he ever has in the NFL to date? Does one of the rookies, Alec Pierce, Jelani Woods, or Andrew Ogletree have a big rookie season? Or does the highest paid wide receiver, Ashton Dulin, reward Ballard’s faith in him?

A lot of questions, right? Would be nice if there was a sure-fire answer. Say like the re-signing of future Colts Ring of Honor member T.Y. Hilton. Or the signing of Odell Beckham Jr.

Well time will tell if Ballard gives into the fans’ demands and wants. For now, though, there is a big-time three-way battle going on for the number two wide receiver starting spot. The horses in this race (get it), previously mentioned are Ashton Dulin, Alec Pierce, and Parris Campbell.

Let’s take a quick look at how these guys have been doing at camp to date and then make a prediction on who will be the one who lines up Week 1 opposite of MPJ. Place your bets!

Out of the gates first is Parris Campbell. No real surprise since he’s the fastest wide receiver on the team. Regardless of that pun or analogy, Campbell was turning many heads at the beginning of training camp. Reminding everyone exactly why the Colts haven’t given up on him and why they drafted him in the first place. Everyone is just really hoping that he can stay healthy this season.

Middle of the race

I’m not sure if you saw Dulin’s incredibly amazing catch the other day. Do yourself a favor and check it out. He’s been with the Colts for three seasons now, and this is by far his best camp.

It’s not just “camp speak” where every player is amazing and great. He really truly is having the best camp of his career. This is, in a way piggybacking off his ‘21 season, where he was the team’s big play guy. I’m not sure if he’ll be able to win the starting job but if he keeps it up, he’s absolutely going to be in consideration.

So, while it looks like Campbell and Dulin are the front runners, we shouldn’t overlook the rookie. While Alec Pierce may not be creating as much hype as the other two, he is subsequently being put on an accelerated learning course. By that, I mean he’s facing off against former defensive player of the year Stephon Gilmore almost exclusively.

Sure Gilmore isn’t what he once was when he won the DPOY award two years ago. However, his knowledge of the game hasn’t taken a hit. And that, maybe more than his athletic ability, is what is constantly testing the rookie. Pierce was quoted as saying that Gilmore knows what route he’s going to run before he runs it. Simply based on how Pierce is standing or lined up or the formation.

Pierce comes with a lot of desired measurables, but he also comes with rookie experience. What the coaching staff is trying to do is provide Pierce with years of experience before Week 1. The hope is that with all of this constant training against Gilmore, Pierce won’t have as much of a learning curve when the regular season gets underway.

Related: 8 goals for Indianapolis Colts to make 2022 a massive success

So who wins the race?

The winner is Campbell. As long as he stays healthy, he is the player most likely to lineup opposite of MPJ against Houston. However, as previously stated, both Dulin and Pierce are going to make it a tough decision. All three of these players are having tremendous camps and this competition will only be taken to new heights once the preseason games start happening.

A quick sidenote on Pierce, don’t be surprised if his season starts off “slowly”. Maybe like how MPJ’s rookie season went. Provided everyone is healthy, the Colts won’t need to “rush” Pierce into the starting lineup. They can give him some plays and/or packages that he exceeds well in to start off and get him comfortable. Then once the season progresses a little further along, they can begin to expand the playbook for him so he finishes up the season strong.

But back to Campbell. This could quite well be his very last season with the Colts. And for that matter, the last time anyone expects him to be more than just a rotational player. So far, he’s showing everyone that he has no intention of that being his future.

Related: Indianapolis Colts rise, fall, and a possible return to title contention in 2022