As the 2021 MLB season draws nearer, find out who the biggest X-factors are for each team in the National League and how they could swing their clubs' fortunes. 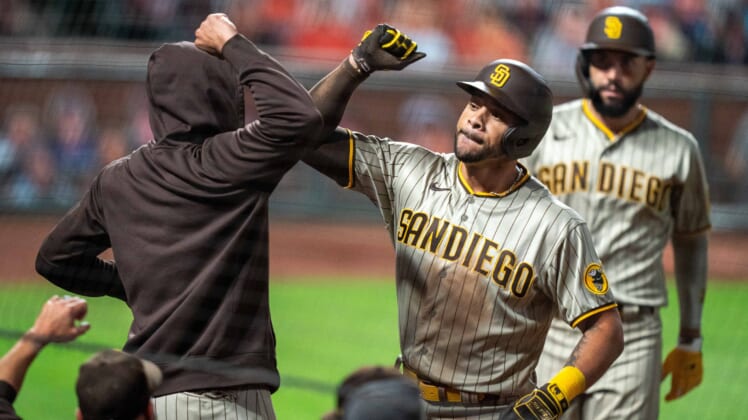 The 2021 MLB season is just days away. Expectations are set, as we prepare for the first full MLB season in two years.

However, who are the players that can move the needle for their respective teams when it comes to exceeding expectations? Here is the X-factor for every National League team in the 2021 MLB season.

The Braves reached Game 7 of the NL Championship Series last season thanks to their young starting pitchers picking up the slack in the wake of injuries; Ian Anderson was part of that play. He posted an impressive 1.95 ERA across six regular-season starts and was phenomenal in the postseason. Can he be the same pitcher across a 162-game season? The Braves need their young arms to continue to progress with Mike Soroka rehabbing from a torn Achilles tendon to stay in the NL pennant race.

While he provided depth, Marte was underwhelming in his brief time with the Marlins in 2020. A return to the Marte of old, a productive and reliable hitter and outfielder, gives the Marlins another impact bat. Alongside the likes of Brian Anderson, Miguel Rojas and Jesus Aguilar, the Marlins have a grouping of productive veterans. Marte playing up to his capabilities complements the team’s young positional core and provides more run support for their compelling, young pitching staff.

Bohm was one of, if not the most impressive rookie to debut in the 2020 MLB season. He hit .338 and was a primary offensive catalyst for the Phillies. In a stiff NL East, the Phillies, like everyone else in the division, have no margin for error. Offensive consistency has been lacking in recent memory for the Phillies. Bohm establishing himself as a force to be reckoned with in the batter’s box would add a new dimension to a productive, veteran offense. It would also secure the hot corner.

The Nationals go as their starting rotation goes. Strasburg made just two starts last season due to a wrist injury, and the Nationals missed the playoffs. A healthy Strasburg is one of the premier pitchers in the sport. He grinds through at-bats, totals strikeouts at a high rate and throws a mean curveball. The Nationals rotation, which also includes Max Scherzer and Patrick Corbin, performing to 90 percent of what it was in 2019 gets them back to the playoffs. That comes from Strasburg being on top of his game.

Carlos Carrasco and Noah Syndergaard are out for at least the first month of the 2021 MLB season. Meanwhile, Marcus Stroman hasn’t taken the hill since 2019, but he’s active. The right-hander has been hit and miss throughout his career, by means of being a groundball pitcher who tends to labor through at-bats. Jacob deGrom and David Peterson carrying the load like they did in 2020 isn’t going to cut it for the Mets. Stroman has to pitch at an All-Star level for the Mets to take advantage of their exuberant offense.

The Cubs are in a rough, retooling phase. That doesn’t mean they can’t be a competitive team, though. Them being such a team is reliant on those not named Kyle Hendricks pitching at a high level. Albeit it was a small sample size (six appearances, four of which were starts), Alzolay was a pleasant surprise for the Cubs last season, posting a 2.95 ERA and holding opponents to a .169 batting average. Alzolay building off his 2020 campaign would help the Cubs replace the veterans they’ve traded/lost to free agency (Yu Darvish, Jose Quintana and Jon Lester).

A year ago, Tommy Edman looked like a star in the making. Unfortunately for the St. Louis faithful, the youngster had an underwhelming 2020, low-lighted by a .685 OPS. Edman is capable of being one of the driving forces of manager Mike Shildt’s offense. He’s a contact machine who is difficult to strike out and can play four positions (second and third base, shortstop and right field). Edman getting back on track (he hit .304 in 2019) gives the Cardinals an elite infield (Paul Goldschmidt and Nolan Arenado operate the corners).

The Reds still have a reliable starting rotation after Trevor Bauer’s free agent departure. For them to continue being such a unit they’ll need some of their younger arms like Mahle to progress to a considerable degree. The right-hander posted a 3.59 ERA and 60 strikeouts across 10 appearances last season, nine of which were starts. The two seasons prior he posted a combined 5.06 ERA (48 starts). Was Mahle’s 2020 success an aberration or a sign of what’s to come?

Burnes was electric in the 12 games he appeared in last season, nine of which were starts. He posted a 2.11 ERA and 88 strikeouts, making effective and efficient use of his backpack of offerings. This was Burnes’ first season as a primary starter. If he can continue to pitch at a high level, he’ll form a potent one-two punch alongside Brandon Woodruff. On the other hand, him taking a step back would further Milwaukee’s rotation shortcomings and likely keep them from returning to the playoffs.

The Pirates have embarked on a full-fledged rebuild, trading several reputable players over the last year. The emergence of a young pitching core would help get the train rolling on a plausible rebuild. JT Brubaker struggled to keep runners off the basepaths and provide length in his debut season at the big-league level. At the same time, it was just his first season. Steven Brault has shown some promise, but he alone isn’t moving the needle for their pitching staff. Brubaker taking the next step would help do as such.

While they have 10 players who could start at six positions and about 12 starting arms on their pitching staff, the Dodgers do have a bit of a hole in their outfield. A healthy Pollock can quell those concerns. When healthy, Pollock is a versatile outfielder (he has played both left and center field with the Dodgers) with a smooth, level swing. Health abiding, Pollock is another considerable threat at the plate for manager Dave Roberts. If he can’t suit up and/or struggles, it forces the Dodgers to fill out their outfield rotation with players who have little MLB experience.

Pham has a sweet swing. That said, he hit just .211 in his debut season with the Padres in 2020. The Padres have a high-octane offense, but it’s lacking a bit in the outfield. Pham getting back to his traditional self, that being a player who ropes baseballs to all fields and posts an OPS in excess of .800, beefs up that aspect of their depth chart. If the Padres are going to overcome the rival Dodgers in the regular season and/or postseason, they need to be firing on all cylinders.

Webb has posted an ERA above five in each of his two seasons at the big-league level. However, he’s still just 24: Webb can become a rotation fixture for the Giants, who surprised the MLB world last season in missing the playoffs by just one game. Webb has a consistent four-pitch arsenal (fastball, changeup, slider and sinker). In getting better command of his offerings, he can begin to rack up more strikeouts and get the Giants through midgame jams. The Giants could use a young pitcher to boast about.

The Rockies are entering a tedious rebuild with Arenado gone and Trevor Story likely following him out the door within the next year. The organization has some headway in its rotation, which Senzatela is a part of. The 26-year-old had a breakout 2020 season, posting a 3.44 ERA and inducing weak contact with his fastball. Healthy versions of Kyle Freeland and German Marquez are top-of-the-rotation pitchers. The trio of arms pitching well could help the Rockies through their precarious situation.

The D-Backs have a deep pitching staff. Concurrently, Zac Gallen has an arm injury, and Madison Bumgarner is coming off a disastrous debut season in the desert: the D-backs would benefit from Kelly taking a step forward. While he made just five starts last season due to a shoulder injury, the right-hander showcased an ability to work out of trouble and get the ball to the bullpen with a lead (Kelly posted a 2.59 ERA across five starts). Kelly stabilizing the D-backs rotation enhances their chances of making the playoffs.

Read More: Why the Arizona Diamondbacks are a dark-horse MLB playoff contender in 2021