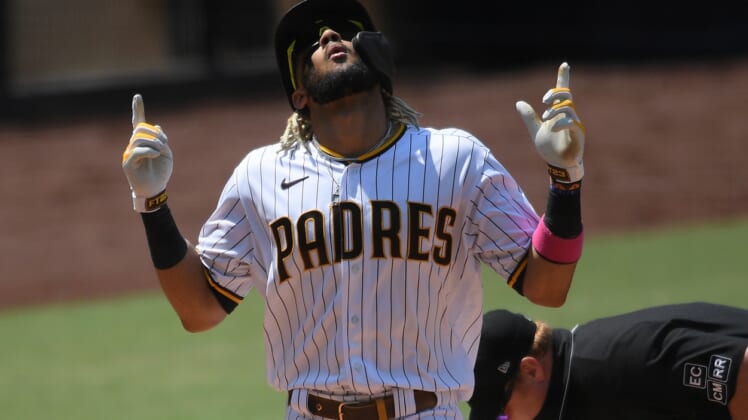 This is a holy cow moment. There’s no other way to go about it. Star shortstop Fernando Tatis of the San Diego Padres will be playing in Southern California for the foreseeable future.

According to ESPN’s Jeff Passan, the 22-year-old Tatis has agreed to a $340 million contract spanning a whopping 14 years. These are not typos. Fourteen years and $340 million in cold hard cash.

It’s the longest contract in the history of Major League Baseball, besting the 13-year deals both Giancarlo Stanton and Bryce Harper are currently playing under.

The $340 million in total value is also the third-highest figure in baseball history, behind Mike Trout and Mookie Betts. With that said, the $24.3 million annually is only the 23rd-highest figure.

Tatis has more than earned this contract. It’s a crazy thing to say after just 143 career games, but the All-Star has lit it up in the bigs. Fernando Tatis is hitting .301 with 39 homers, 87 RBI, 27 stolen bases and a .937 OPS during that span. Some might conclude that these are awe-inspiring numbers.

As for Padres owner Peter Seidler, he now has a ton of money tied up to a few players moving forward as San Diego looks to compete for a World Series.

That’s nearly $1 billion in cold hard cash tied up to five players. Talk about going all in. What’s even more shocking is the fact that Tatis’ contract includes a full no-trade clause. For. Fourteen. Years.

He also gets a $10 million signing bonus. The extension starts during the upcoming 2021 season. Those around the baseball world agree that this is some crazy stuff.