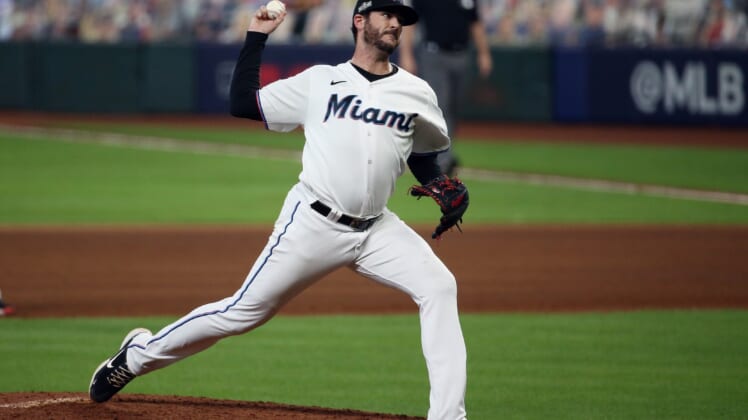 The signature element of the Miami Marlins that should ensure their continued success off a shocking run to the playoffs is their budding, young starting rotation.

This offseason, Miami’s brain trust perfectly complemented their pitching pipeline by adding a combination of proven relievers, which should have Marlins fans excited for what’s in store for 2021.

The Miami Marlins have established a sturdy bullpen

The Marlins have added three veteran relief pitchers in Anthony Bass, John Curtiss and Dylan Floro. Their bullpen was an obvious need even after last year’s success, as Miami’s unit finished second-worst in baseball in expected fielding independent pitching, per FanGraphs.

Bass has been a smooth contributor out of three pens over the last three seasons (Toronto Blue Jays, Seattle Mariners and Chicago Cubs), posting a combined 3.44 ERA, 3.63 FIP and 1.06 WHIP over said time. He has found success getting hitters to make weak contact on his sinker.

Curtiss is coming off a splendid season with the Tampa Bay Rays where he posted a 1.80 ERA, an 0.96 WHIP and 25 strikeouts across 17 appearances. He got opposing batters to bend at his slider and also made three starts as an “opener” for Rays manager Kevin Cash.

In a way, the Marlins took advantage of the Dodgers’ pitching surplus in the wake of them signing Trevor Bauer by trading for Floro, who the World Series champions didn’t really need. LA’s loss is the Marlins’ gain, though.

Floro was a steady force out of the Dodgers bullpen last season, as he posted a 2.66 FIP and surrendered a mere home run in the regular season. The 30-year-old possesses a consistent three-pitch arsenal (sinker, slider and changeup).

This trio of right-handers enhances a platoon that lost veterans Brandon Kintzler and Brad Boxberger to free agency and would’ve otherwise been doomed again to be among MLB’s least-effective platoons.

The Marlins have a lot of positive parity in their starting rotation with the likes of Sandy Alcantara, Sixto Sanchez, Pablo Lopez, Daniel Castano, Elieser Hernandez and Braxton Garrett present. Fellow top pitching prospects — which the bulk of the aforementioned pitchers once were — in Max Meyer and Edward Cabrera have yet to make their big-league debuts.

These young studs have come nowhere near their ceilings and some of them will inevitably not crack or stick in manager Don Mattingly’s rotation. There’s too many of them (which is good), meaning one or two will be moved to the bullpen and/or pitch in Triple-A.

Those who get moved to the bullpen will be adjusting to a new role as a long reliever/flex starter and maybe even settle into a new full-time position. It’s paramount to accompany those in their new roles with proven commodities like the Marlins are doing.

Bass, Curtiss, Floro, James Hoyt, Yimi Garcia and Richard Bleier should make for an extremely reliable bullpen, or at the very least, a competent one, which was a key missing ingredient to last year’s club.

This is one of the best all-around pitching staffs in MLB, which will be keeping a gradually improving offensive attack in games. Miguel Rojas, Brian Anderson, Jesus Aguilar, Starling Marte, Garrett Cooper and Corey Dickerson are sly veterans who do damage in their own respective ways at the plate. Meanwhile, youngsters Jazz Chisholm, Monte Harrison and Magneuris Sierra recently got their first licks at the MLB game.

The most sustainable model for success in MLB is establishing a deep and functioning starting rotation. Every team that has won the World Series in recent memory had sturdy and/or elite starting pitching. In the Marlins’ case, they have a young rotation that’s already in the top half of the sport and has the potential to be an elite grouping.

Having that unit get the ball to a handful of relievers who are accustomed to getting crucial, late-inning outs is an ideal match, especially if their young arms provide considerable length, which they’re built to do at this point in their careers.

The Marlins play in the beast that is the NL East. Regardless of the objective likelihood of every team doing as such, all five teams in the division are at least coming up with a scenario where they win the NL East and/or reach the playoffs.

To stand a chance in the NL East, the Marlins need their offense to progress to the point where they’re at least in the middle of the pack, comparatively speaking. At the same time, every team has their kryptonite. For the Washington Nationals and New York Mets, it’s rotation durability. In the Philadelphia Phillies’ case, it’s offensive consistency. While they just reached the NL Championship Series, it’s fair to wonder how the Atlanta Braves young rotation will fare over its first 162-game season as a collective whole.

The Miami Marlins have been cost-effective on the open market and in doing so have filled voids and complemented the shining aspect of their organization.