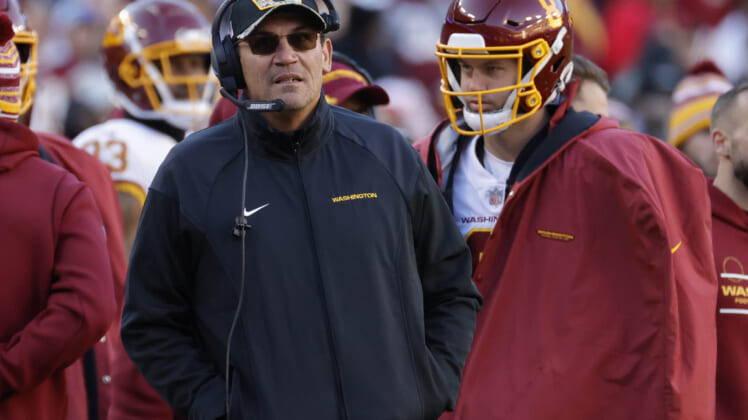 With the NFL announcing they’ve postponed the Cleveland Browns-Las Vegas Raiders matchup originally scheduled for Saturday after a full-blown COVID-testing breakout, now the wormhole opens up for several other postponements. Another game that has now been postponed is the Washington Football Team-Philadelphia Eagles game scheduled for 1:00 PM Sunday. Based on news from John Clark of NBC Sports, that’s exactly what’s happened.

Washington will now play Philadelphia on Tuesday, at 7:00 PM EST, giving the team more time to return to health.

The reason is due to Washington having what’s now up to 21 of their players on the reserve/COVID-19 list, giving them a fraction of their roster, which isn’t ideal for any football game.

Earlier when making a radio appearance on The Team 980, WFT head coach Ron Rivera was asked if the organization has attempted to pressure the NFL on delaying Sunday’s game. Rivera didn’t take the bait, but he did indicate a desire to have the scheduled Week 15 matchup pushed back.

Washington is set to be without their starting quarterback Taylor Heinicke, who’s already on the COVID reserve list, in addition to backup QB Kyle Allen, who’s in the same boat. Keep in mind, their intended starter, Ryan Fitzpatrick is out for the season after having hip surgery.

But that’s just a small portion of the team’s roster concerns. As mentioned, 19 other players are currently unavailable.

Rivera also added that 80% of his players are showing no symptoms, “absolutely none“. Perhaps, with the league’s new protocols passed on Wednesday, some or many of his players currently on reserve can make their return, with the game now pushed back until Tuesday.

Both Washington and Philadelphia are 6-7 so far on the season, making this NFC East divisional matchup an important game for both teams’ playoff chances.